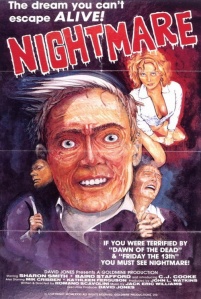 A mental patient is released from the hospital based on his reaction to a new medication, yet persistent nightmares with clues to his past drive him loony again and he goes on a killing spree on his way back home.

-Stop staring at me!  Those eyes will give me nightmares.

-Is it me or is it odd the advertising wants you to compare it to Dawn of the Dead and Friday the 13th?  Friday I kind of get but are there secretly zombies in this movie?

-I’m trying to figure out how many people are in that purple blob at the bottom.

The dream you can’t escape alive!

The film begins with poor George Tatum having a nightmare, a nasty one at that.  As dreams tend to be, the details are all over the place but it looks like a woman and a man are having some very kinky sexy time when there are splashes of blood everywhere and George wakes up with a bunch of innards surrounding a screaming severed head at the foot of his bed.  George really wakes up this time, screaming his head off.  Perhaps that is a poor choice of words? 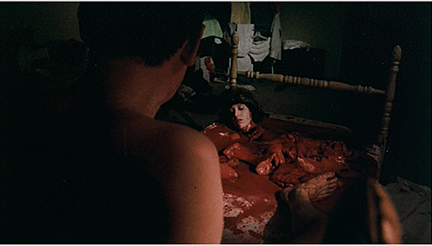 Not what I meant by ‘head in bed.’

George, you see, was released recently from a sanitarium because he’s been nuts forever.  He’s been taking an experimental drug that was supposed to calm him down and be re-introduced into society but with every nightmare since his release, George has been murdering people in some very gruesome ways.  George’s doctor is assigned to a detective to hunt him down before things get worse but they realize that George is heading home.  George is also piecing together what his recurring nightmare means and how it ties to his childhood.  George starts to lightly terrorize his ex-family with hang up calls (no pizza deliveries?) before ramping his actions up to the extreme, though some of his actions tend to get twisted around and put on his young son, C.J., a prankster who gets his kicks from scaring people and a major target for George. 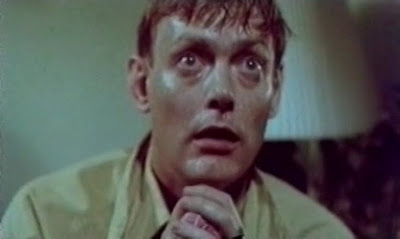 Nightmare in a Damaged Brain (or just shortened to Nightmare) is a sleazy, mean-spirited slasher film that delivers the goods but does so in a shocking fashion and especially for 1981 it was condemned as being reprehensible to be seen on the screen.  The nightmare scene alone contains more blood shown on screen than most slashers of the time would show throughout their whole runtime and it’s shown multiple times.  Decapitations take more than one hit to do the job (realistic but yuck!)  Stabbings are shown in graphic detail, particularly in one scene where the babysitter gets it bad.  And if you don’t like kids being the target of a killer maniac, Nightmare is not the film for you! 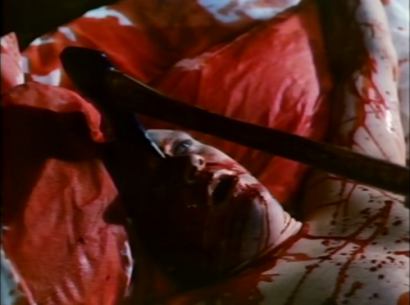 Usually you go to bed to get rid of a splitting headache.

I’m not sure how prevalent such a story theme as “young child sees deviant sex and turns into a killer” but that’s something I’ve seen several times during this era to give it more of a psychological edge, giving the killer a “motive” even though you might have to be Sigmund Freud to figure it out.  The film may not tell a great straight forward story, particularly with George’s ex and the family, but it’s all eventually wrapped up in the end and honestly it’s not that bad.  True to the rest of the film’s tone, it’s not the happiest ending you’ll ever see but that may not come as a surprise after everything you’ve watched.  Consider yourself warned, this is one of those video nasties that actually deserves it’s reputation!

Story: 6 – A young kid sees his dad cheating on his mom in some kinky ways which makes him go nuts and turn into a killer for life.

Blood: 10 – From beginning to end, the red stuff flows like water.

Overall: 6 – Usually gory films tend to be more of the fun variety but Nightmare shows the dark side of these types of films and doesn’t hold back either.

-Listed as a Video Nasty, the film’s original UK distributor was sent to prison for six months by releasing an unapproved version of the film.

-Joel Coen (Big Lebowski, No Country for Old Men) was originally the editor of the film but was fired early on.

-Effects genius Tom Savini was credited on the film as a special effects director though Savini disputes he had anything to do with the film aside from providing advice to the actual effects team.