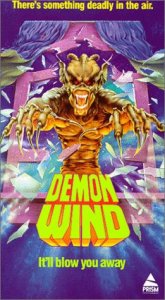 A terrible vision drives a man to invite his friends to his grandparents farm where a mysterious fog keeps them from leaving and are attacked by an evil force that turns the victims into demons. 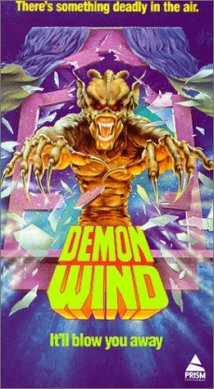 – I honestly can’t look at the box cover without giggling at the amount of fart jokes I can make out.

– Why is the Creature from the Black Lagoon crashing through someone’s bedroom window?

– And what monster would paint their room pink and purple?

There’s something deadly in the air!

The film begins many (many) years ago in a farm house that contains about a dozen too many crucifixes and selfies of Jesus but I get it, the couple that lives here is very religious.  The house suddenly comes under attack by demonic forces, crucifixes be damned, and the couple try to keep them out but the husband becomes possessed and kills his wife.  Eep, that’s all, folks?

Sixty years after these unfortunate events, young man Cory, dealing with his father’s suicide, invites his friends to his grandparents farm house to help him cope and also, just maybe, figure out what happened to his grandparents so many years ago.  His friends arrive one by one so we can get to know their stereotype horror character though I was surprised at some of the character options.  Preppy guys with great hair are always jerks, of course, but the ninja magician?  He kicks ass!  Don’t know why he’s in this movie and not in his own bad film but I’ll take it! 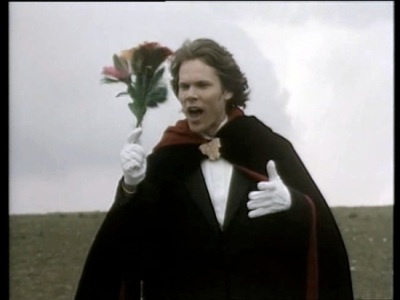 For my next trick I’ll disappear from movies altogether!

After being attacked by the house furniture, everyone wants to cut the reunion short yet they are unable to due to a killer fog that has surrounded the building preventing anyone from leaving.  One by one, Cory’s friends are possessed and become zombie-like creatures intent on bringing their master to our world and Cory only has a couple of special daggers left behind by his grandparents to fight them off which do little good until Cory reads aloud his grandmother’s book and inherits fabulous secret powers to fight the demon master and save the world.  This movie is insane. 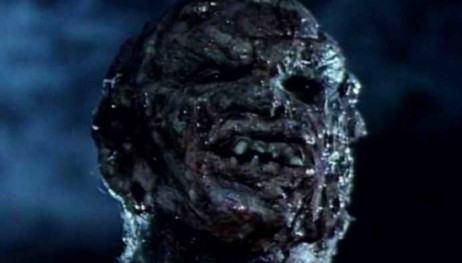 If you attempt to watch Demon Wind, I’ll spare you some brain cells by telling you the story makes very little sense.  Frequently I’d question if what I was watching was made up on the spot because it certainly seemed like it.  I’ll certainly say that it looked as though more effort was put into the ghoulish creature effects though even they were barely passable at times and once my friend said the “master” creature looked like an evil penis, well, I couldn’t unsee it.  The film is certainly loaded with  unintentional humour from top to bottom thanks to the shoddy production values, storytelling, acting, etc. and was almost worth watching for that reason but be warned that the movie is otherwise unwatchable and I’m only recommending it for fans of bad cinema alone.

Story: 2 – A string of scenes get a bunch of people stuck in an incredibly haunted place fighting demonic creatures and a mermaid-penis monster on a foggy day until one of them becomes an alien and saves the day.  Whaaaa?

Blood: 4 – The ghoul effects look alright though they all seem to spit up yogurt and some of the gore special effects were better than I expected.

Nudity: 3 – There is a funny scene where the demon wind tries to seduce male victims with a topless woman.

Overall: 5 – Personally, I got more unintentional entertainment out of this than I ever expected so I’ll bump the rating a notch for this train wreck of a film.

-The film went into production between January and February and the weather didn’t co-operate with freezing temperatures and winds that would topple over sets causing the filmmakers to revise the script on the spot.

-Lou Diamond Philips was uncredited as one of the many demons.

Categories: Featured, Review, So Bad it's Good!, Worst of the Worst