Four reasonable adults go hiking through the wilderness, get lost at night and get picked off by a cannibalistic loner whose ghost family haunts the hills.  Whaaaa? 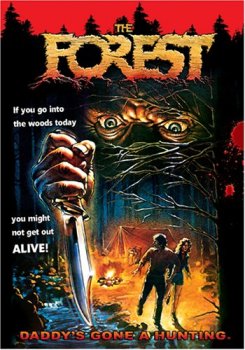 -The trees have eyes!

-I’d run away too if I saw a knife twice my height coming after me.

-What are the odds that the killer is Smokey the Bear and he’s angry that they didn’t put out their fire?

-I kind of like the cover art, though that makes me very wary of what I’m about to watch.  Too often I’ve seen great box art actually come off like the best part of the movie.

If you go into the wood today you may not come out ALIVE!

Two couple engage in a bit of the ol’ “Macho Man vs. Independent Woman” when it comes to surviving out in the wilderness so they pair up in their respective genders and head out into the nearby mountains to prove …something.  Bad luck begins early as the men break down along the way and must hike to their meeting place where they intend to hike more.  They are so far away that it gets dark and the girls decide to stay and wait for them so they make camp.  Then John shows up.

I’m coming for ya! Be scared! Please?

John lives in a cave nearby and while he lives off what he can find, he prefers to eat people so once he sees the girls, they become a hasty target to him.  The men meanwhile seek refuge in a cave and guess who they make friends with?  Seriously, they kind of make friends with John who goes so far as to tell them his sad story about his unfaithful wife, his sick children who later committed suicide and his decline into the weird world of cannibalism.  Poor guy, I guess.  Oh, did I mention the ghosts?

Yes, the ghosts of John’s wife and children frequently show up in order to aid the survivors of John’s reign of terror.  In all honesty, the movie is unbelievably boring and just a tad silly — especially with an awful “killer” who looks more like a lost trucker — yet with the introduction of the ghost children the movie completely lost me with such a silly plot device.  The air came out of the balloon, so to speak.  There’s nothing worth seeing here, it’s just irredeemable trash.  Nothing to see here. 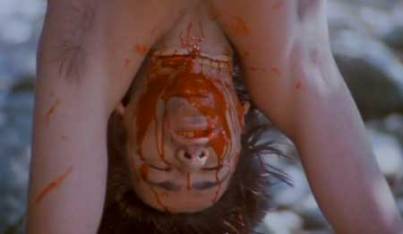 He could’ve just turned the movie off.

Story: 2 – Two couples have a gender hike but fall prey to a confused trucker turned cannibal.

Blood: 4 – The “reason” to see the film, so to speak, though there’s nothing exciting about what’s shown on screen.

Overall: 2 – Aside from a few chuckles here and there, The Forest lost me early on and never won me over.

-The film was shot in thirteen days.  Uh huh.