On the night of the big prom, a group of teenagers who were involved in a deadly accident years prior are targeted by someone with vengeance on their mind. 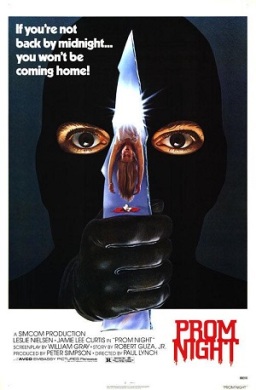 If you’re not back by midnight, you won’t be coming home!

The film opens with a group of naughty children in an abandoned school playing a sadistic hide and seek game where one pretends to be a killer and the rest are the victims.  A trio of siblings pass by and one of the sisters goes into the building hoping to play.  The group don’t play well with her and chase her next to a broken window and she falls through it to her ugly demise.  The kids swear an oath to not tell anyone lest they be blamed for it.  Leonard Merch, known child rapist, is mistakenly arrested for the murder instead.

Fast forward a few years as the kids are grown up in high school and it’s almost time for the prom.  Kim Hammond (Curtis) is the prom queen with prom king Nick (Stevens) who was one of the kids who made the earlier pact to keep her sister’s accidental death a secret.  The usual high school BS goes on while everyone gets ready for the big night unaware that the police are on the lookout for Merch who has escaped.  Several people receive harassing phone calls from a raspy-voiced caller with a list of everyone who was involved in the little girl’s death years ago.  However, they chalk the calls up to Lou, the bulky prankster who likes to pick on everyone and currently involved with Wendy, Nick’s ex who wants to get back at him at the prom.  Is she gonna drop pig’s blood on him? 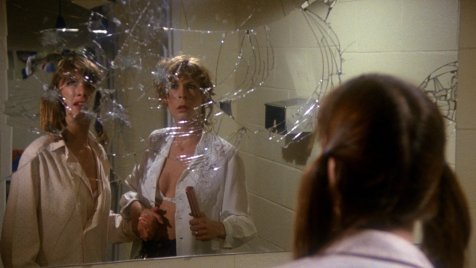 No it’s the mirror’s fault for breaking, not you.

The night of the prom, everyone has their dates to pick up and all the plans are set for a night of disco dancing, lovemaking and untimely death! A masked assailant is on the prowl and working their way down the kill list.  Despite a light police presence on the lookout for Merch, the intruder slips into the school to continue their murderous ways including a real shocker of a kill and ends with an interesting conclusion. 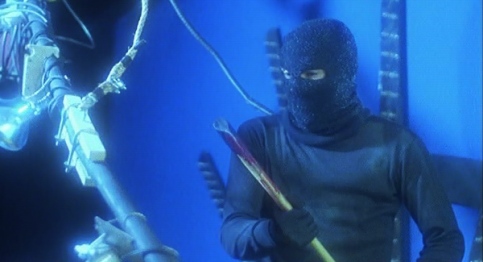 I really should have washed this mask before I left.

Though Prom Night was released just as the popularity of slashers was starting to take off, don’t think the film plays lightly with the red stuff.  Gore hounds will have to wait until later in the film but there are some nasty parts, including a slit throat with a glass shard in slow-motion and a fantastic decapitation via an axe.  Throw in some of the usual stabby-stabby knife-knife and the movie can call itself a slasher!

What do you mean this is a serious movie?

The first time I watched Prom Night years ago, I don’t think I was particularly fond of it but watching it this time around (and paying attention helps) I appreciate it so much more.  The screenplay contains many of the typical horror tropes of the time (ie: a masked/disfigured killer, crank calls, etc.) but the story is well told and introduces several different plot threads regarding the identity of the killer, trying to make you think the obvious answer may not be the right one.  The pacing may not be the best with the first two-thirds of the film containing mostly character development with the final third turning into the slasher film you paid to see but it’s certainly worth it by the time the credits roll.

Story: 8 – A young girl is killed in an accident and years later those involved in her death are targeted by a masked assailant hellbent on exacting revenge…at their prom.

Blood: 7 – Armed with an axe, a knife and hey, even broken glass, there’s a decent variety of kills and plenty of red stuff when necessary.

Overall: 8 – I’m not sure why I didn’t like it before but I enjoy it now.  Prom Night didn’t become the prototype slasher but that’s what sets it apart from the others that would come out in the wake of Friday the 13th.

-Paramount showed interest in distributing the film but only planned a very small release so the filmmakers went with another company.  Paramount would release Friday the 13th not long after.

–Prom Night would go on to spawn three sequels and a really bad remake.