Dr. Herbert West, jailed for his various crimes, receives a visit from the prison’s new doctor who has similar aspirations as West did and so the experiment to bring the dead back to life continues behind prison walls.  What could possibly go wrong?

– Not much to the cover really, just a dude admiring his prickly glow stick in front of an electric chair.

Welcome to death row.  The doctor will see you now.

Thirteen years ago, a little boy witnesses the brutal death of his sister at the hands of a zombified body which just so happens to be the fault of Dr. Herbert West’s (Combs) and he is arrested for his crimes and sent to prison, never to be released.  Thirteen years later, the boy, Harold Phillips (Berry) has grown up to be a doctor himself and transfers to the prison where West has been incarcerated.  Dr. West hasn’t been able to do his usual work without his “re-agent,” the bright green serum he’s used in the past to bring living tissue back to life. Harold brings him a syringe full of the stuff, taken from the scene of his sister’s death years ago.  Harold wants to help West complete his work in successfully bringing a dead body back to life…without the usual “zombie” issues, of course.

The movie tries to act both as a sequel as well as introduce non-fans to what Re-Animator is since it’s been so long since Bride released and even longer since the original came out.  However, with wanting to retread previous material, longtime fans have to deal with a lot of familiarity in this story.  With the change of setting to a prison, Dan is no longer available so Howard Phillips is his replacement, playing the part of the willing helper with a guilty conscience. Instead of the headless Dr. Hill as a protagonist, we have the typical evil prison warden who is West’s foil this time around, but he’s no David Gale who was a highlight of the previous movies with his decapitated mannerisms. There’s still room for a love interest but we know what happens to them in this series and it never ends well for the poor girl.

How much does this cost??

Once again, it’s the Jeffrey Combs show, owning the screen as Herbert West. His supporting cast is a mixed bag though. Jason Barry is alright as the Dan replacement but he can be cheesy in the more dramatic scenes. Simón Andreu plays the evil warden well, but there’s noticeable dubbing due to him and most of the cast being Spanish. He’s certainly got the evil “look” down pat. Elsa Pataky does what she’s supposed to, which is look hot. 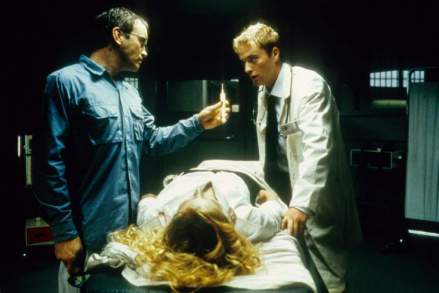 Shes your girlfriend so you do it.

The filmmakers seemed to dial back on the sheer craziness of the previous movies — especially with what we saw in Bride — and made Beyond Re-Animator more serious than it needs to be.  It’s not bad and certainly watchable if you haven’t seen the other films before, but for fans waiting so long for another Re-Animator, this can be considered a disappointment.

Story: 5 – It plays out a lot like the first Re-Animator, just set in a prison where everyone is Spanish.

Blood: 6 – Certainly bloody at times but doesn’t come close to the nastiness of the earlier movies.

Rating: 5 – Beyond covers a lot of material that’s already known to fans and doesn’t come close to the nasty humour we’ve seen in the previous films.  Still, it’s nice to see Jeffrey Combs as Herbert West one last time.

-Several sequels were planned but never produced.  Bring on the re-make!