Eight months after re-animating the dead, Drs. Herbert West and Dan Cain continue their efforts to bring back the dead with a new plan to re-animate Dan’s old girlfriend, Frankenstein-style.

-“Relax my dear, I’m a professional doctor, not like that hack Dr. Giggles.”

-Is he hanging from the ceiling?

After spending some time in Peru to do some more research — and to wait for the pressure to die down from the massacre from the last movie — Herbert West and Dan Cain return to their old stomping grounds after their latest breakthrough in re-animation. West has decided to take his research down a different road and instead of animating one whole body, he’s re-animating the parts and putting them together. He’s come across the heart of Dan’s old girlfriend, Meg, and convinces Dan that he can bring Meg back if Dan helps him.

You can be talked into anything, Dan.

Meanwhile, a lieutenant of the local police force is following Herbert and Dan as he continues the investigation of the events from the previous movie, although his basis for doing so is quite personal. He meets with the hospital’s pathologist, Dr. Wilbur Graves, who’s in charge of the biological evidence (ie: bodies, parts, etc.) from the original movie. The lieutenant happens upon a curious piece of evidence: the head of Dr. Hill, which is strangely well preserved, much like all the other bodies and such that West messed with. Dr. Graves decides to look further into a strange glowing serum that he mistakenly believes Dr. Hill was working on…before he lost his head. After injecting the serum into a dead bat and bringing it back to life, Graves uses it on Hill’s head which of course brings him back to life and he has only revenge on his mind.

I’ll do anything to be on camera!

If there’s one thing that Bride manages to do well, and maybe even better than the original, is how bloody it is. Since the motive of the movie is bringing body parts back to life, Herbert has fun putting random body parts together to see if they work. Five fingers walking around with an eyeball attached so it can see? Replacing a dog’s leg with a human hand? It all comes together with the eventual Frankenstein scenario by bringing to life an entire body put together with different body parts. I’m not big on surgery or seeing muscles and tendons outside of the skin so I was definitely grossed out a bit when I saw the Bride on screen. 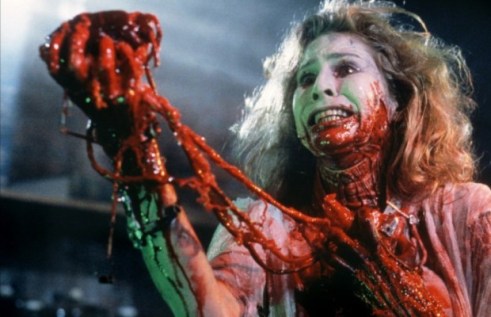 Can you believe the Academy snubbed her for best actress?

I’m all for the further adventures of Herbert West, but there were certain aspects that made the original so great that were missing in this movie. Re-Animator was teeming with dark humor, and while this movie has its moments, they don’t show up anywhere near as often. The movie focuses a bit on the cop following West and Dan only for him to lose his shit immediately when he gets the chance but if you’ve seen the first movie you know what will become of him. I was disappointed with how little Dr. Hill was in the movie. He was in it for maybe five-ten minutes? It was a great five minutes, but more Hill vs. West would’ve been great.

Story: 6 – The story is very similar to the original with the good doctors trying to bring life back from death only this time they go the Frankenstein route by animating different body parts stitched together to bring back Dan’s dead girlfriends.

Blood: 9 – Some scenes had me squirming in my chair.  Good job as usual by the effects team.

Boobs: 3 – Well, you see a couple sets of boobs but you probably won’t enjoy them.

Rating: 7 – More disgusting than the original but missing some of the comedic beats that made the original just so damn memorable, it’s still worth a watch for fans of Herbert West.

-Actress Barbara Crampton, who played Meg in the original film, was asked to do a cameo but she was talked out of doing it by her agent who believed the role to be too small for her to bother with.