So Bad it's Good!

Well, the movie seems to be about a man murdered by drug smuggling vampires then later turned into a cyborg who shotguns his way through the undead ranks and make sure the drugs stay out of America.  At least that’s what I think it’s about. There are scenes like a Chinese ghost marrying a gorilla vampire mixed into the bunch so I really have to wonder whether the crack in the movie were real because whoever was making this movie was definitely using that to pad out the movie.

Apparently this is just one movie in a series of off-the-wall martial arts films made by Asian producer Tomas Tang.  Looking up his IMDB page reveals some awesomely titled films that I’m sure don’t come close to what they promise.  I don’t know how he got away with the Robocop image for the poster art, but it’s certainly a huge selling point…for me.

American drug traffickers join forces with Asian drug makers to manufacture and ship the drugs back to America.  They also provide vampires for protection.  Oooookay?  An anti-drug agent is killed while trying to infiltrate the operation but is revived as a cyborg created to stop the bad guys and maybe even vampires.

Was it any good?

Oh dear god no!  Everything about this movie had gone horribly wrong.  Even the poster art is a lie!  There’s no way this was made as a serious film, they had to know it was a joke from the beginning.  But if you go into the film with this knowledge, it’s actually enjoyable in the “so bad it’s good” sense.  Make no mistake, it’s baaad, but in a good way!

Where to start first…well, how about that awful dubbing?  We’re talking full on, 70’s-style kung fu classic, awful dubbing.  If the movie was serious, the people in charge of dubbing figured it’d be better as a comedy.  The “story” such as it is, makes little sense and there’s the need for random characters to fill the audience in on just what’s happening.  For some reason the word “cocaine” is never used, the drugs are just referred to generically as “drugs.”  You hear the word an awful lot and it kept getting funnier every time I heard it.

Now the vampires!  These are Asian vampires who apparently have different abilities from traditional European vampires.  They get around by hopping, yet they can disappear and reappear when necessary.  They’ll be stiff while moving, yet get into marital arts fights.  They even shoot fireworks and air blasts from their arms.  Even the makeup makes them look more zombie-like than vampirish.  I did see one of them bite someone’s neck…so I guess they’re vampires.  Power Ranger vampires. 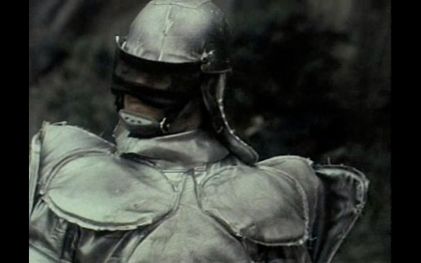 Of course, I couldn’t wait for Robocop to show up.  If I thought the movie was silly now, it goes into overdrive when the filmmakers set this up.  Instead of a gang killing an officer, it’s an anti-drug agent killed by a vampire.  Unlike the actual Robocop movies, no one has any moral objection to turning the dead guy into a silly robot.  It literally takes the scientist involved 30 seconds to get permission because the guy’s dead anyway.  The cover clearly shows Robocop, but instead we get an actor in a ridiculous costume pretending to act like a robot while the robotic voice dubbing is perfectly suited to the costume.

Is there anything actually good on it’s own?  Well, the make up and blood effects can be alright depending on the scene.  During some scenes you can pick out the good and bad effects in the same shot, very inconsistent but not unexpected.  The fight scenes aren’t too bad either, though still ludicrous considering who is doing the fighting.

Blood:  4 – While some of the make up effects look good, but it doesn’t take long to find a terrible set of effects.  Sometimes even in the same scene.

Boobs:  3 – A ghost shows up with a see-through dress then has sex with a gorilla vampire she marries. Little awkward, but thanks!

Story:  2 – There was a story in here…somewhere…

Overall:  7 – A good example of a terrible movie delivering some great entertainment.  Get a group of friends together for a few beers and laugh away.  You got vampire martial artists vs. a dual-shotgun-toting RoboGuy!  It may sound great on paper (or computer screen) but make no mistake, it’s a terrible movie that’s secretly quite entertaining due to the sheer badness of it.  Consider yourself warned.

Categories: So Bad it's Good!