A couple of nice American girls on a European road trip break down and while looking for help wind up knocking on the door of a crazy German surgeon.  How crazy is he?  He thinks three people surgically stitched together makes a centipede.  However it’s not quite as funny for our poor vacationers.

Judging a book by its cover 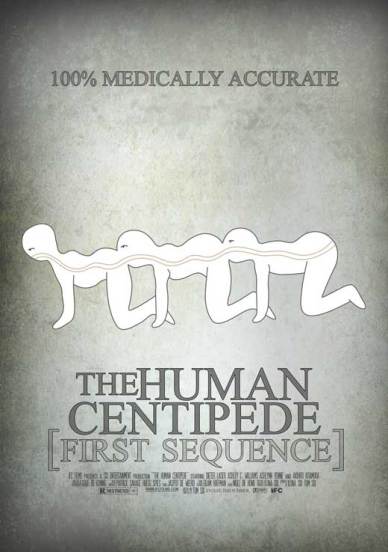 -Wait, you need waaaay more people to make this a real human centipede.

-I’d call “first” in this line if I had to.  The food would taste way better than if I were further down the chain.

-Finally, a movie for people who like this particular fetish…sickos.

-Seriously though, that’s gonna happen in the movie, right?

It didn’t take long for the movie to make a name for itself once it was announced and the press materials were released.  How could you not look at the accompanying pictures and trailer for a film about to be released called “The Human Centipede?”  It was out of sheer, morbid curiosity.  How else could you explain it?

The film gained instant and enduring notoriety after everyone asked the same question, “Do they eat how I think they’ll eat?”  There’s more to the movie than that, but if you’d like a visually stunning answer, watch the sequel as it’s exactly the film people expected the first one to be.  And if you really enjoy them both, you’ll be happy to learn there’s a third one being made!  Everything has to be a trilogy these days, even human centipedes.

A couple of American girls are travelling in a foreign country and happen upon the house of a truly evil German surgeon looking for a new pet and boy does he have some strange ideas for a pet!  Along with a Japanese tourist, they’re put through some nasty surgery and become the titular creature and grosses out everyone who sees them.

Was it any good?

Working at a Blockbuster at the time of its release, I had the occasional customers asking if we carried it.  No, we didn’t.  Had I seen it though?  Oh yes.  How gross is it?  It’s not that bad!  They all had a look of disappointment when I told them it wasn’t that graphic and it was mostly happening in your mind.  Then I had a look of disappointment because I realized people really wanted to know if people ate shit in a movie. 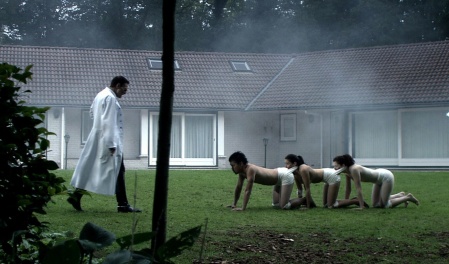 That’s been the reaction most people have given the movie.  It’s not as bad as it let on, but that’s a good thing!  I enjoy a movie that lets me use my imagination, it can be so much worse if you let your mind think about it rather than being shown the imagery.  The movie takes the less is more approach often and it makes the movie a better movie-watching experience.

It’s a familiar movie to genre watchers, what with Americans in a foreign land getting kidnapped and having weird, disgusting things done to them.  It’s definitely akin to the films like Turistas or Hostel, only coming up with new ways to disfigure beautiful people.  It’s slow and deliberate, building tension as it works its way to the money scenes you’ve been waiting for.

The movie comes off like it should be a gorehounds’ treat, but like I’ve said, the end result is much different than expected.  The surgery scene is very short and what you do see done around the mouths and anuses is covered up for the most part.  Of course, these people have to eat and we witness what happens but everything is covered up so it’s up to your imagination to really see what’s going on. 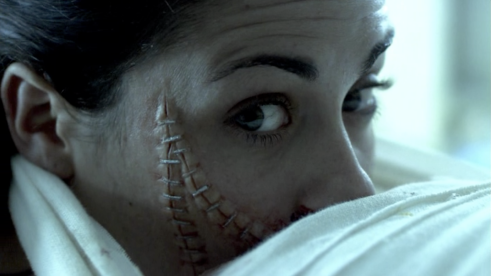 I bet those carrots don’t taste as good the second or third time through.

Dieter Laser is great as Dr. Heiter.  He just exudes hatred and contempt for people and especially foreigners.  He really comes off as the type of person who would try this crazy thing just because he doesn’t care if they live or die, although he would prefer they live so he can use them as his new pet.  Ashley Williams and Ashlynn Yennie, as the American women, do what they can, although they aren’t portrayed as the smartest of people.  Heiter comes off as so evil right off the bat, they should never have gone in his house, regardless of their predicament.  Their performances quickly degrade into just whimpering and crying.  Akihiro Kitamura plays the Japanese man kidnapped to complete the operation.  He only speaks Japanese which is an immediate language barrier as he can barely communicate with anyone.  He becomes the defacto leader because…well, he’s in the front of the “centipede.”

Blood:  6 – The movie skimps on the surgery scene and covers up a lot of the post-surgery work, although the movie is still disgusting.  There’s also some nasty gun shot wounds and throat slicing.

Nudity:  4 – Our female leads go topless and under better circumstances, it’d be nice to see, but here their nudity just adds to their humiliation.

Story:  6 – The setup isn’t entirely original but the films’ direction is a little different than others like it.

Overall:  6 – Disappointing given the hype behind it, but it’s not that bad and winds up a little more accessible due to the “less is more” approach given to the premise.

In the end, the movie is all about the torture and humiliation of three people.  There’s no rhyme or reason to it, it’s just happening.  The movie runs quickly to get into the thick of things and wraps up almost as quickly.  It’s not a bad film by any means, and its intention to disgust the audience will surely do just that to most, but given the premise, there could’ve been more to it.