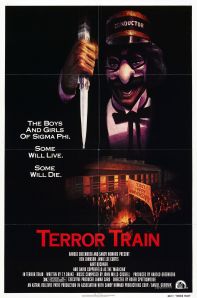 It’s New Year’s Eve and the last big party for a college fraternity that decides to go out with a bang with a shindig on a train.  Unfortunately there’s a killer on the train who wants to take out those responsible for a cruel prank gone wrong three years earlier.

Three years ago, several freshmen of a fraternity are involved in a cruel prank on one of their fellow pledges.  Among the tricksters is Alana (Curtis) who is reluctant to participate but does so anyway. They trick poor loser Kenny (MacKinnon) into losing his virginity with one of the girls but it winds up being a corpse in a bed instead.  He loses it and…who knows, the movie skips ahead three years.

Now in their graduating class, the same people from that incident are putting on a masquerade party on an excursion train for their last big bash of their school year.  The elder train crew are just happy to have a job and hope for an easy night, however someone sneaks onto the train after killing one of the students and taking his costume to blend in among the students. 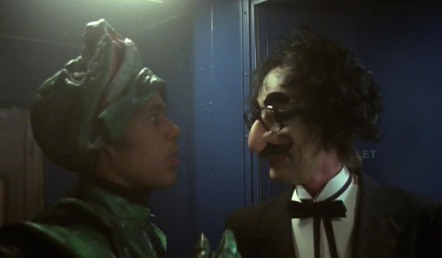 What the hell are YOU staring at?

If there’s one thing that separates this film from other slashers just like it is the setting.  Taking place on a moving train, there are only limited options to run to.  However, I feel that this aspect wasn’t really fully explored.  The narrow corridors and limited space only come into play towards the end of the film as the number of victims dwindles down.  What I liked better was the aspect of the killer changing their mask throughout the film.

Typically in slasher movies where the villain wears a mask, that mask never changes and usually stays on until the end.  Our guy switches it up as he works his way through his victims, taking their identities until he reaches his goal…or gets his mask taken off.  It is a nice twist on the mask-wearing killer, but it doesn’t bring any extra tension to the film.  The audience knows who the killer is dressed as, we’re supposed to feel dread for these jerks who played a cruel prank.  It’s not that scary. 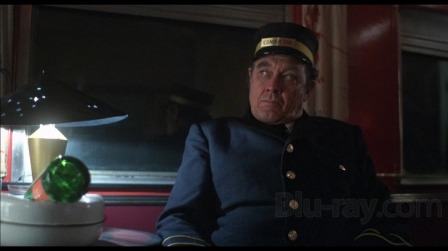 Just waiting for something to happen…

Jamie Lee Curtis, fresh off her success from Halloween and The Fog, stars with her scream queen lungs but doesn’t bring much to the table.  She’s the de facto heroine in the film because she’s Jamie Lee Curtis from Halloween and The Fot, yet her character is really just like any of the student characters.  She was part of the prank like everyone else, she just feels more bad about it than the others.  Not really heroine material.  She probably would’ve bought it in the end had the killer not been an idiot.

The film relies more on tension to scare you than gore.  It’s a little bloody but most of the blood is seen as after-the-fact killings.  Some throat slashing, bodies covered in blood, a head falling out of the luggage.  Not bad, I’ve seen worse. 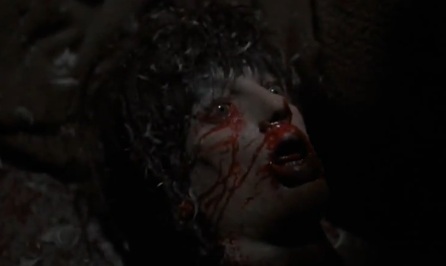 One head in a duffle bag.

Overall, Terror Train combines some good ideas but doesn’t result in a scary good time.  Maybe back in the golden age of slashers it held it’s own but it doesn’t hold up over time.  Perhaps it’s a good candidate for the dreaded reboot?

Story: 6 – Pretty standard slasher though has a unique setting and inventive killer changing his identity throughout the film.

Blood: 5 – A decent variety of kills.

Nudity: 3 – A brief topless scene to wake up the crowd.

Overall: 5 – Very average flick that, despite trying to be different from other films just like it, still doesn’t do enough to set itself apart from many others that came out the same time.

-A young David Copperfield makes his only appearance in a film playing…the magician.

-The scenes inside the train, the majority of the film, were actually filmed in a Montreal warehouse at night.  It was rocked back and forth to give the illusion of movement.

-The idea for the film came from a dream one of the producers had.  The basic idea was “Halloween on a train.”

Categories: Back to School, slasher