After discovering a small number of corpses in hospitals have been eaten by immigrants from a far off cannibal island, an expedition is led to investigate further into the matter.  I was led to believe there were zombies in this film?

In several hospitals in, let’s say New York City because everything happens there, doctors are finding corpses from the morgue to be mutilated and partially devoured.  An investigator is called in to look into the matter and discovers the cause to be cannibal immigrants!  Soon he, an anthropologist and news reporter are on their way to the island of Kito, inhabited by primitive cannibals.  Really?  That’s what you want to do?  Sounds like a bad idea.

In a stroke of bad luck, the boat’s engine overheats and they’re stuck on the island.  A doctor living on the island tells them they should be fine though the primitives can be very dangerous.  So within minutes of arriving they’re attacked and must wait for rescue in the morning.  Needless to say, they don’t all make it but are somehow saved by…ZOMBIES!  Terrible, ugly looking zombies that chase off the cannibals.  Of course, they’re zombies so they want to eat people too.  Turns out the good doctor has been doing experiments on bodies and somehow created the undead.

After the original Dawn of the Dead was a huge hit, especially in Italy, there was a glut of zombie movies that flooded the market.  (In fact, we’re going through a similar phase now with a constant stream of zombie films and TV shows because they’re so popular.)  Even movies that had nothing to do with zombies had the undead tossed in because it was the popular thing to do.  It’s like the filmmakers started off with a cannibal film and someone said, “Fuck it, throw in zombies.” 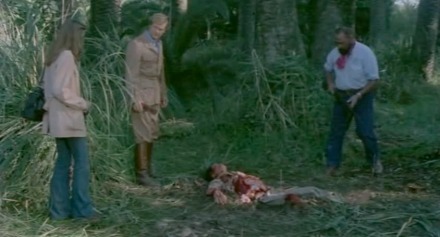 The movie is so hilariously bad you can’t help but laugh and be at least a little entertained by it.  The plot makes little sense with badly dubbed characters making terrible decision after terrible decision.  These people are clearly not prepared for documenting the primitive culture, if that was their intention, and to defend themselves they bring along a guy with a gun.  They really deserve what happens to them.  The introduction of a mad doctor who makes zombies feels tacked on and adds nothing of real value to the film other than a guffaw over the terrible makeup the actors are sporting.  There are only a couple of zombies in the film overall so the title is a little misleading.

There’s usually one thing I can always be positive about when it comes to Italian productions is that they are usually pretty gory and the movie does deliver.  Plenty of gutting and cannibals munching on organs and eyeballs, gunshots, a few hacked off limbs, a machete to the head and more!  Maybe my favourite scene is early on when a cannibal jumps out of a hospital window and lands on the ground, the dummy’s arm flies off on impact.

Get them my pretties!

I can’t recommend it for being any good, but I can recommend it as a film so awful that you can laugh yourself through it and enjoy some decent gore scenes along the way.  Kind of how people can still watch old kung fu flicks, they’re so awful they’re fun to watch.  Just don’t get your hopes up with the zombie aspect of the movie because they’re barely in it.  A cannibal movie in zombie clothing!

Story: 2 – To summarize:  Cannibals from a far off island come to America and feed off our dead so four random people go to their island because….why again?  Who needs reasons?

Overall: 5 – Honestly, it’s more like a 2 but I honestly enjoyed it way more than I should’ve.  It’s a bad movie but unintentionally entertaining!

-When it was originally released in North America, it was retitled “Doctor Butcher, M.D.”  and released in other markets as “Zombi 3.”

-The film shared a lot of the same sets as Lucio Fulci’s “Zombie” (which itself was filmed to be a sequel to George Romero’s “Dawn of the Dead.”)