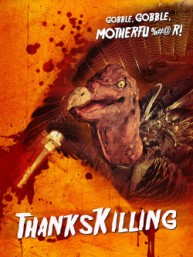 A Native shaman, disgraced by the pilgrims not long after they arrive in America, places a spell on a turkey that goes on a white person killing spree.  Five hundred years later, the turkey is back to kill off, specifically, five college students on their way home on Thanksgiving holidays.

After a brief introduction to a topless pilgrim getting killed by a talking turkey, the main story fast forwards a few centuries to the present where a small group of college students are on their way home to their families on a Thanksgiving holiday.  Their jeep breaks down so they decide to camp in the woods where earlier, a hermit’s dog pissed on a patch of ground which resurrects the turkey back to life and immediately wants to do some killing.  “Turkie” winds up going after the students, hunting them down, killing anyone in his path as he still must come through for the Natives and kill white people. 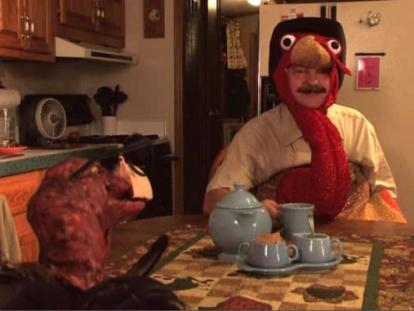 Of course the film is totally done for comedic purposes, the filmmakers knew full well they were making a comedy so there’s no sense in trying to take this seriously and just try to enjoy it for what it is.  What it starts out as is a parody of slasher films and there’s a few funny moments to enjoy it as such, but it’s a movie about a killer turkey so stupid is the order of the day.

The best parts of the film involve Turkie killing victims in gory ways with painfully awful Thanksgiving/turkey-related puns but the worst scenes also involve the stupid puppet too.  One scene has Turkie talking to the redneck sheriff, who is also dressed like a turkey, believes Turkie to be a midget because Turkie is wearing just a fake nose/glasses costume to pass as a human. Really? Turkie eventually kills him and wears his face and totally tricks every other character he comes in contact with into thinking he’s the sheriff even though they have to crouch down to see him.  Really?? Every character in this film either starts out or later goes full retard.  It seemed as though the heroine of the film was the only likeable character who also had some sense about her but she somehow becomes a ditz halfway through the movie for no reason.

Turkie isn’t all that great of a character either.  He’s a foul-mouthed killer puppet that kills by pecking out hearts to whipping out guns and knives seemingly out of nowhere.  I’m sure that was in the filmmakers “Ha Ha it’s funny” column but it firmly goes into my “Ha Ha no it’s not” column.  And there’s a lot of that in the film, most of the comedy is beyond stupid.  You can’t laugh at these groan-inducing scenes.  Some people may find seeing a turkey almost get fucked by a driver as payment for hitchhiking to be funny…I didn’t but to each their own.  The movie just tries too hard and crosses over that line between funny and stupid.

The movie is barely over an hour long but it just gets worse as it goes along.  I know the movie has a small cult following who love them some killer turkey action, probably under the influence of something (which didn’t do a thing for me while I watched it,) but all I can say is that the movie wasn’t fun or entertaining to watch.  I know it’s a bad pun, but the movie doesn’t deserve anything better, it’s just a turkey, plain and simple.

Story: 3 – There was actually some thought put into the story though it wasn’t put together very well.  In a movie with a killer turkey, who cares about a few gaping plot holes?

Blood: 6 – The movie fails at comedy but there is at least some good gore.  Turkie carves up his victims with knives, a tomahawk, various guns, even uses his own beak to kill people by ripping out their heart or tongue.

Nudity: 4 – A topless pilgrim in the opening scene (as advertised on the box cover!) and another lady topless later on certainly doesn’t hurt to try to improve the movie’s watchability.  Nice try!

Overall: 3 – It’s not without a few moments of levity and some decent kills to boot, but the main concern is that this is an unfunny comedy so prepare for more eye-rolling than belly-chuckling.

-The film was originally distributed by the filmmakers on Amazon themselves and reportedly took a year to sell just 1000 copies.

-A sequel was done after the filmmakers successfully reached their Kickstarter goal of $100,000.

Categories: slasher, Worst of the Worst