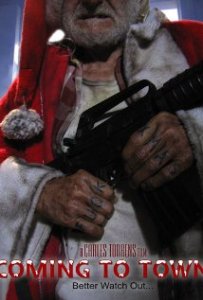 A young girl writes a letter to Santa, but she doesn’t ask for dolls, toys, dresses or anything else…but revenge on the bullies at school.  I suppose if you’re nice enough, Santa will bring you anything.

The film beings with a drunken Santa (Ferguson-Woizman) driving to a town being regaled by a disgusting sex story from a crazy elf (Parr) sitting next to him.  He asks the elf to read a letter from a little girl name Jo-Beth (Manning) who is constantly bullied by kids at school and the mean principal is not willing to help her at all.  She feels she has been good all year but instead of the usual toys and candy, all she wants for Christmas is revenge.  Santa is more than ready to punish the naughty people on his list by whipping out his trusty machine gun and psychotic elf on their asses.

“Coming to Town” is a great short film that introduces another “Santa Claus” that is out on the same night as the regular Santa.  While one is out delivering presents, this one is out punishing the naughty.   While this sounds like it could be just another riff on many other “killer Santa” movies (and yes, there are quite a few) this one is made more for laughs than anything else.  While I suppose some could find it scary, you should think of “Coming to Town” as an even fouler take on “Bad Santa.”   There are quite a few funny moments throughout the short 15-minute run time, my favourite being a hilarious interaction between the two Santas as they happen upon each other at the same house that proves to be quite awkward.

My main problem with short films that I like…is that I always want more.  The film delivers exactly what it intended to give me: some good laughs with a twisted take on a beloved mythological figure.  I’m sure budget constraints made sure the filmmakers did the best they could for fifteen minutes, and as much as I think I would’ve enjoyed a longer movie, what I was given is a fun, albeit quick, take on good old Santa.

Story: 8 – While one Santa is out doing the presents, there’s another one making sure the naughty people on the list don’t repeat offend.

Blood: 2 – There’s a little bit of blood here and there, but in a nice show of restraint, this Santa doesn’t go around killing people, just terrorizing them to the point that they stay off his list.

Nudity: 0 – Santa doesn’t have time for that.

Overall: 9 – Honestly, you can’t go wrong with the short film.  It’s only fifteen minutes and if you enjoy dark humour then it’s quite a fun 15 minutes.  The movie is quite hard to find on video, if you want to watch it, just click here.

-The bully in the film is played by Daeg Faerch, who would go on to play young Michael Myers in Rob Zombie’s remake of the classic slasher, “Halloween.”

-Please take note that Santa’s last name is spelled “Claus” and not “Clause.” If you do, that’s because Disney brainwashed you.