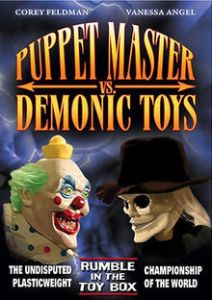 A hot but evil toy creator makes a deal with a demon to kill millions of people on Christmas Day with demonic toys and only Corey Feldman and a handful of puppets can save the world.

There’s so much to explain about how this movie came about before I delve into it straight on.  Both Puppet Master and Demonic Toys are franchises under the Full Moon Features umbrella.  There are only a few Demonic Toys films but Full Moon’s crown jewel is the Puppet Master series which has seen ten films produced thus far with more to come, I have no doubt.

What happened to us?!

Full Moon has had a rocky road in the past in making their films.  For years they were actually releasing their films through Paramount Pictures but after they split up, Full Moon slashed their budgets but kept trying to release as many films as possible.  There was a noticeable drop in quality all around and eventually the Full Moon name kind of disappeared for a short while.

There always seemed to be an idea to bring two of their more well known franchises together for a Vs. movie but it never panned out until, what I assume, Full Moon got desperate and made a deal with the Sci-Fi Channel (long before they renamed themselves SyFy) to finally get Puppet Master vs. Demonic Toys made.  Hooray and huzzah…except for the fact that Full Moon didn’t have much say during production and probably hoped for the best while their babies were in the hands of someone else.  As a long time Puppet Master fan, I’ve been through the best and the worst that Full Moon has offered and I can safely say that they could’ve shat out something better than this turd.

What happened to you, what about us??

The film concerns a toy company owner named Erica who, at a younger age, demanded the previous owner of the company, he father, to create living toys for her to play with.  He makes a deal with a demon who hands over some of the Demonic Toys in exchange for his soul.  Erica takes over the company when he dies but ultimately comes to hate the Toys because they never listen to her.

Meanwhile, Robert Toulon, the great grand-nephew of Andre Toulon, the original puppet master, is in possession of the Puppets and is trying to figure out how to get them to live again through Toulon’s old diary.  Erica somehow installed a security camera to watch him after she fired him from the toy factory and learns about his discovery and wants those puppets.  They will help with her plans to send out millions of killer toys to murder children on Christmas Day.  However, the puppets are almost destroyed in a fire and are no good to help anyone until Robert upgrades them with cyborg parts and unleashes them against Erica in order to stop her evil plans.

At least he didn’t have to watch the rest of the film.

The plot is almost similar to Halloween III’s, just with a more festive angle utilizing killer toys instead of killer masks.  It’s incredibly convoluted (I didn’t even cover the demon’s beef with the Toulon family or how a love story gets shoehorned into the plot between Robert and a female cop) and just plain stupid.  It’s a long ninety minutes and every plot twist makes it harder and harder to watch.  In fact, I hated the movie so much on my first viewing, I vowed never to watch it again but since it has a Christmas theme, I figured I’d give it one more shot.  Now I can safely say I will NEVER watch this shit fest again.

As if the plot isn’t bad enough, the fact the producers got actors such as Corey Feldman and Vanessa Angel (who I hadn’t heard of since Kingpin) really shows they put some thought into making this movie as awful as possible.  Feldman seems to be in this movie for name recognition only and his idea of acting like an older person is to talk like he has laryngitis.  He has lots of dialogue and it’s all delivered with this hoarse delivery making any scene he’s in unbearable.  So there’s two big strikes against this movie.  The plot is absurd and the acting by the lead actor is practically unwatchable.  Oh wait, what about the toys?

Yeah, I haven’t mentioned much about the toys and puppets that are supposed to be in this movie.  Practically every toy/puppet got redesigned for this movie, and while Blade looks identical to earlier films and the other Puppets at least look similar to their earlier selves, the Demonic Toys are look radically different and pale in comparison to their previous incarnations.  The puppets wind up getting cyborg upgrades which makes them look silly but thats par for the course in this movie The puppetry is basic and works well for the Demonic Toys, though the Puppet work is a little iffy.  Certainly nowhere near the work of earlier titles in the series.

Is there anything…anything worth watching in this movie?  Absolutely not.  It’s a goddamn mess from start to finish and certainly a slap in the face to anyone to considers themselves a fan of these movies.  Honestly, it should’ve stayed unmade.  The world could do without Puppet Master vs. Demonic Toys.

Story: 2 – Convoluted and awful, this is the best way to get puppets and toys to fight one another?

Blood: 2 – Other than some blood caused by bites, slashes and gun shots, one man has his eyeballs blow up after a toy yells at him.

Nudity: 0 – Not even a pair of boobs to try to make up for this junk going on.

Overall: 1 – Hey, are you a fan of either Puppet Master or Demonic Toys?  Then stay far, far away from this sack of crap.  You’d be better off knowing this doesn’t exist.

– Full Moon intended to make a spin-off series of films with both series called “Puppet Wars” but had to scrap the idea due to budget constraints.

– Charles Band, head of Full Moon, received credit as executive producer but had nothing to do with the film and considers it non-canon.