A few years after a hazing went wrong and cost a girl’s life, the sorority house where it happened becomes the target of a killer dressed as Santa who’s out to slice and dice the girls inside as well as the fraternity of boys who’ve dropped by for a “visit.”

After the opening scene to set the story up, the girls of the sorority today have one thing on their minds as they await a fraternity of boys flying in to visit.  To make sure everything goes as planned, they drug their house mother’s milk so she’s out all night. Nothing’s going to get in the way of their night time nookie, except for a killer Santa Claus.  It’s close to Christmas in Santa Barbara, after all!

It doesn’t take long for things to go wrong as Evil Santa kills off characters before I’ve even gotten the chance to remember their names.  It just goes to show how throwaway some characters are.  The caretaker has more dialogue than some of the kids.  As soon as the boys arrive, everyone is drunk and ready for some pre-martial sex.  That’s considered naughty so Santa’s out to punish them sexy kids.  In fact, everyone in this flick is horny.  Even the cops assigned to watch over the house can’t help but leer at the ladies.  And why not?  No one is aware of how bad things are, ever.

For Christmas? You shouldn’t have!

The characters are never aware of the danger they’re in.  Despite the deaths and disappearances of certain characters, the remaining cast just fuck away the movie until they run into Santa for the first time and he dispatches them rather quickly.  There isn’t even a chase scene until the final act so the death scenes are quite brief.  I realize these characters aren’t meant to be very smart, but they’re so lackadaisical and unaware of their surroundings.  People go missing or killed and they still just want to bone.

Santa keeps it old school with an axe or a knife most of the time.  There’s a scene where Santa literally goes medieval by donning a suit of armour and interrupts one of the film’s many sex scenes by shooting the guy in the head with a crossbow.  He finishes the lady off with the axe that probably came standard with the suit with a quick decap.  He even takes out a couple of victims with an airplane propeller just to be different. 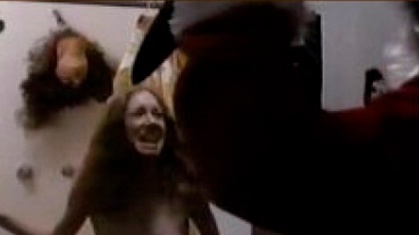 All I want for Christmas is to leave this house alive.

The film is full of jump scares by several of the secondary characters like the mentally handicapped caretaker who just seems to hang around the house at all hours of the night.  He’s the resident “crazy old man” that was a stock character in a lot of slashers back in the day.  Every slasher just had to have a crazy dude who has to warn the kids of imminent danger but of course no one listens to him.  Otherwise, people pop out from every corner for a scare or it’s Santa with a quick axe chop and onto the next scene. 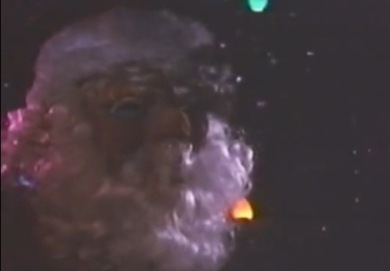 The film is light on story though surprisingly some time is actually given to develop some of the characters.  It’s not a lot but in this type of film, you take what you can get.  Story-wise, all you’re going to get is the opening scene and the end scene to explain just why these slayings are happening.  There’s a interesting twist at the end that’s a bit random, but you’ll never see it coming.  The rest of the movie is a constant stream of “boo” scares, quick kills and a slew of scenes with the students either talking about or in the course of the hanky-panky.  Coming out in the middle of the slasher boom, it provides just what the genre lovers were looking for and delivers at least on those expectations.

Story: 4 – Notice I didn’t mention much about the Christmas theme?  Being set in California, there’s no snow and while the house is decorated, nothing is really festive.  The story is as basic as it can be and the Christmas setting is just an excuse to have a killer Santa.

Blood: 6 – An interesting combination of impalings, stabbings, a decap and other tools to get rid of victims quickly.

Nudity: 5 – There are several sex scenes with a few lasses banging around the house in the nude.

-Shot in just ten days, the cast and crew slept in the mansion where they were filming.

-This was actor David Hess’ directorial debut. He is mostly known as Krug from the original “Last House on the Left.” Hess died in 2011.

-Film debut of Jennifer Runyon who I only recognize as the female student that Venkman was hitting on while shocking the other guy early on in Ghostbusters.

Tagged as: 1980, Christmas, David Hess, slasher, To All a Goodnight