A young boy gets some major psychological scarring after his parents are killed by a man in a Santa suit, takes a tour through an orphanage with a stern nun then when forced to don the suit himself at a job, he loses it and decides to punish anyone he runs into that is “naughty.”

The film begins with a young Billy on a trip with his family to see his crazy old grandfather in a home.  Grandpa is comatose but when no one is around he talks to Billy about how bad Santa is and getting punished by him is not a good thing.  On the way back, they pull over to pick up a hitchhiking Santa but he attacks them, raping the mother and eventually killing both parents while Billy runs off and watches in horror.  Billy survives the ordeal but is put into an orphanage. 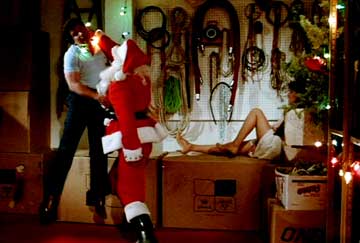 One handed hanging? Santa must work out.

The Mother Superior of this particular orphanage is a vicious dispenser of justice and instills in Billy just exactly what punishment really is.  He’s a little shit disturber in there and she meeds out punishment with a belt, under the thought that this is how you straighten kids out, not realizing that this added trauma is not helping Billy’s fragile little mind heal.

Eventually Billy grows up and gets a job at a toy store…at Christmas time.  The manager forces him to wear a Santa suit to greet the children.  He narrowly makes it through the day but when he sees one of the employees try to rape a female employee, Billy loses his marbles killing the rapist but his warped take on who is naughty takes over and goes on a killing streak leading himself back to the orphanage. 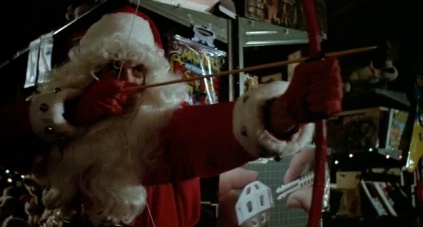 It may not be surprising to tell you, especially back in the 80s, that there was a huge uproar over this film.  Parents were disturbed to see trailers featuring a killer Santa Claus that frightened their children.  They were protesting outside theatres because Santa should be pure and the usual “think of the children” excuses.  Critics derided the film, especially Siskel & Ebert in this famous clip where they shame some of the filmmakers.  To me though, what is surprising is how good the movie wound up being.

Don’t get me wrong, this film may ruin your Christmas spirit a bit but of course it’s not really Santa but a man dressed as Santa doing the killing.  The story is built up so well, seeing this young child grow up with constant abuse, it’s no wonder he goes crazy.  The difference is that where some films will give you a brief flashback to the killer’s young past to justify their insanity, Silent Night, Deadly Night goes all out and makes it a core part of the story. You feel bad for Billy…until he starts hacking people up with an axe, of course. 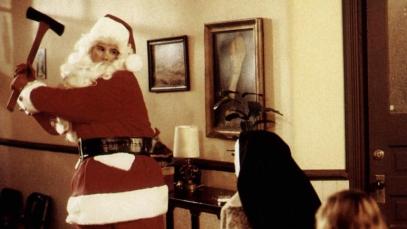 The surefire way to decap someone in one shot? The home run swing.

Like many slashers of the time, the film leans heavily into the exploitation territory with lots of nudity though tempered with a heavy dose of implied rape and plenty of gory violence.  Santa’s bag is full of deadly items; he starts off with a hammer and works his way up to a bow and arrow, an axe and…deer antlers?  The film isn’t without a morbid sense of humour at times.

Overall, while there was a ton of teen slasher flicks released at the time, most of them couldn’t hold a candle to this film.  It’s not perfect, but it doesn’t insult the audience with a killer with a flimsy motive and lame justification for violence.  We see the poor kid grow up and try as hard as he can to be normal but his mind could only take so much before he cracked.  A modern comparison would be Rob Zombie’s remake of “Halloween,” with Michael’s family life in the toilet constantly, he could only take so much before he lost it as well.

Story: 8 – Surprisingly well thought out, the audience is witness to poor Billy’s traumatic past as it haunts him until he can’t take it anymore.

Blood: 8 – Naughty people get punished in a variety of increasingly gory ways.

Nudity: 8 – A nice handful of topless ladies throughout, though a few scenes aren’t enjoyable due to the threat of rape.

Overall: 8 – Until I run into something that’s better, “Silent Night, Deadly Night” is the definitive Christmas horror movie.

-Opened the same weekend as “A Nightmare on Elm Street” and was making slightly more at the box office before it was eventually pulled out of theatres.

-The film was pulled after only two weeks of release.  It was put out on video a year later and was very profitable.

-The majority of the kill scenes were filmed by the movie’s editor Michael Spence due to director Charles Sellier Jr.’s reluctance in handling the gory scenes.

-The film was followed by FOUR sequels and a loose remake released in 2012 titled “Silent Night.”  None of them were as good as the original. 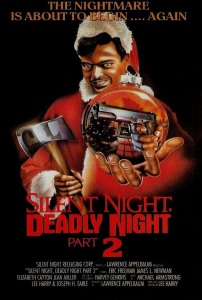 Billy’s younger brother, Ricky, is detained in a psychiatric hospital apparently after killing several people.  He tells his sob story to a doctor who is there to evaluate him.  Ricky recounts what his brother did in the original movie and how it led him to do the same.

The “Silent Night, Deadly Night” franchise is interesting in that no movie is alike, they’re all different except for this one, but for one very good reason: this is a flashback movie.  The producers of the original film hired someone to re-edit the first film and release it as a sequel.  The producers coughed up enough money to film roughly half a movie that had to rely on the original which brings up a few gaping plot holes. (The biggest hole is the fact that Ricky was only a baby and very young when these events happened.  Sometimes he discusses events he wasn’t even present for.  How can you remember something that you didn’t see?)

Sorry, I’ll try to refrain from picking at the plot holes.

The first half of the film is mostly flashback scenes to the original footage interspersed with old Ricky throwing it to another flashback or scenes filmed to make it look like Ricky was around and much older than he was in the original film.  The second half is mostly new footage of Ricky trying to be normal, but goes nuts whenever he sees red (flashbacks to Ricky’s past show him hating the color) leading him to kill whoever is bothering him before  terrorizing the neighbourhood in what can be considered more of a montage than anything before he continues his brother’s original plan of killing Mother Superior.

The story is a mess but may be the best the filmmakers could do with what they were given.  It’s very disjointed with all the flashbacks, and then when it becomes its own movie, it’s a race to the finish the movie, presumably because the money was running out.  My main gripe about the flashbacks is that they’re neutered and edited to fit the plot more than to present any real suspense so the film lacks the punch it thinks its delivering to the audience. 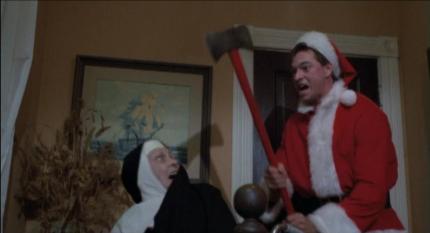 I’m not sure who’s more surprised, the nun or Santa.

Another issue is the setting of the film.  Yes, it’s Christmas time but if you don’t count the original film’s footage, there’s barely anything Christmtas-y about the film.  Some houses in the background have some basic Christmas decorations but it’s not until the final act that Ricky dons the red suit but seems shoehorned into the plot simply because the killer in the first one did the same thing.

I don’t usually discuss the acting in films because most of the actors do a competent enough job, it’s only when they’re extraordinary or extraordinarily bad and the actor portraying Ricky, Eric Freeman, is in the latter category.  Almost every line is delivered in the worst way possible and with such little conviction, he’s just reading lines more like a cartoony super villain.  His eyebrows emote more than his words. However, it’s his awful delivery that contributed to one of the internet’s most beloved meme’s so he’s immortalized forever now.

Overall, if you’ve seen the first movie, the sequel is a mostly dull affair until the final 20-30 minutes with Ricky’s rampage being the hilarious highlight of a movie gone wrong.  The flashbacks lack the punch they originally had because there’s no build up.  Even the newer kill scenes lack suspense because the majority of them happen in such quick succession, it’s a bunch of gory kills one after the other.  Not that there’s anything wrong with that, but that may be the only positive note I can make about a movie that aspires to be just like its predecessor but fails in every way.

Story: 3 – Crazy younger brother does same thing crazy older brother did, only not as well.

Blood: 5 – Aside from the edited kills from the original, the sequel offers some hilariously over the top kills that include a car battery making a guy’s eyeballs explode and a decapitation.  Sadly, the majority of the kills are by gunshot.

Nudity: 2 – Not counting some of the flashback footage, not much is on display here.

Overall: 3 – Aside from the eyebrow acting and violence displayed on an apparent garbage day, there’s not much to the film to recommend it.  You get a neutered, shorter version of the first film with a silly wrap around story that makes little sense.  Stick to the original, it’s so much better.

-Even with the new footage, the film was about ten minutes off its intended run time so the rest of the time was spent on an incredibly long end credits crawl displaying the cast and crew of both movies.

-All the new footage was filmed in ten days.

-Elizabeth Caitin did a lot of softcore films.  I may have seen one or two on Cinemax when I was younger…

-Actor Eric Freeman’s eyebrows move up and down 130 times.  Allegedly.