A tough as nails cop teams up with a beautiful psychic to stop a serial killer who has returned from the dead to continue killing in the name of Satan.

The city of Los Angeles is gripped in a panic due to a serial killer, known as the Pentagram Killer, who is on the loose and murdering victims, carving pentagrams into their skin as a form of devil worship.  Detective Russell Logan (Phillips) gets a tip from a psychic (Griffith) that a man named Patrick Channing (Kober) is the Pentagram Killer and will strike soon but she warns Logan against killing the guy, meaning no death penalty either.  Logan eventually captures the killer and it’s not long before PK gets the gas chamber, though it’s odd that he was looking forward to it.

Logan is later confronted by Tess, the psychic who tipped him off about Channing, who gives him shit for letting the killer get the death penalty.  He doesn’t think much of it but he starts to see Channing wherever he goes and the killings continue even though Channing is supposed to be dead.  With the help of Tess, Logan pieces together that Channing may have a dark power on his side that allowed him to resurrect and also take possession of peoples’ bodies so that he can keep on killing in the name of the devil.

In real life, I’m not really big into psychics, religion, cults and devil worship, but sometimes they make for some entertaining mumbo jumbo in horror films, though “The First Power” is more like a supernatural action movie than a horror film.  Story events build up to chase sequences which may also lead into a car chase or two.  Throw in some random boo scares, psychic visions and nightmare flashbacks and boom, you got a horror movie…right? 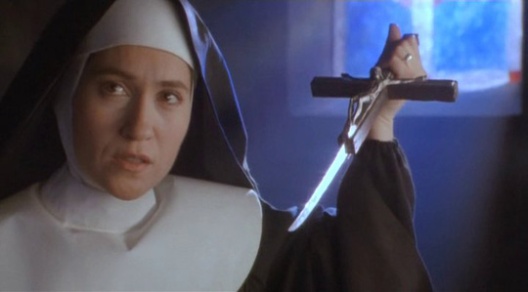 It’s ALWAYS a Jesus-shaped dagger that saves the day.

Alright, so it’s not scary, but the action is entertaining with a fair amount of gunplay and car chase sequences.  The film is not overly bloody, the worst parts you’ll see are the pentagram cuts on the victims’ bodies.  There are a few stabbings (still trying to earn that horror cred, huh?) but I was more surprised at the movie’s attempts to NOT show blood. Maybe I have the TV version?

Scared yet? I have an axe now!

In the end, “The First Power” is a bit weak as a scary film; as a horror-themed action flick it’s not so bad.  If you temper your expectations that way, you’ll get a decent thrill out of the flick but you won’t be wondering why there wasn’t a “Second Power” and “Third Power” sequels.

Story: 5 – Serial killer body hops back from the dead with the help of Satan and only La Bamba can stop him.  Actually, I wish that was the movie!

Blood: 3 – Gun wounds, stabbings, cut up bodies, and an impalement are among the grisly scenes you’ll see though it’s not very bloody.

Nudity: 1 – There’s a tease early on but there’s nothing here.

Overall: 5 – Pretty average B-grade action flick that has a supernatural element to separate it from all those other satanic serial killer movies that came out.

-The film’s original title was “Transit” (due to the killer’s ability to body jump, ha ha) but was changed in post production to “The First Power” to make the audience more aware of the supernatural elements.

-Genre veteran Bill Moseley had a small role as “the bartender.”