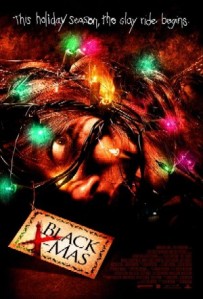 An escaped mental patient makes his way back home for Christmas but it’s been turned into a sorority house in the time he’s been incarcerated.  Not that it matters, since he’s just gonna carve everyone up just as he did thirty years prior.

If you had asked me even a day before I sat down to watch this film for just the second time if I liked it the first time, the answer would’ve been a definitive “no.”  I did not like the movie at all, and being a fan of the original, thought it was one of the worst remakes to come out at the time, being a disgrace compared to the original.  I thought I was in for a shit ninety minutes and I’d be here pounding the keys to pump out a quick couple paragraphs and be onto something much better.  However, after giving it another chance, I would up enjoying the mindless, mean-spirited mess.

The plot in Black X-Mas is basically the same as Black Christmas with the escaped lunatic killing sorority sisters in his old house around Christmas.  The newer film takes Billy, the mostly unknown killer from the older film, and fleshes out his backstory, kind of like what Rob Zombie would do with his version of Michael Myers.  The filmmakers really out of their way to give Billy the shittiest childhood imaginable:  He’s got a rare liver disease that makes his skin yellow, his mother killed his father, she locked him up in the attic and years later would have sex with him when her new husband couldn’t put out one night.  She later conceives what would be Billy’s daughter/sister.  He eventually kills his family, gets put away to the loony bin until he successfully escapes years later and makes his way back home to kill some more.  That’s the whole story because the rest of the movie is watching bitchy college girls get told the entire story through flashbacks until they get killed in some gross fashion by Billy.

Now that’s how you kill the Christmas spirit.

The plot notwithstanding, the film’s main source to entertain us is in how Billy dispatches his victims.  He’s a particular fan of going after eyeballs so we get to see people get their eyes impaled on a candy cane or plucked from their skull.  They get eaten too which seems extreme but again, look at that plot.  Eyeball eating fits right in.  The film is definitely graphic when it wants to be, aside from the eyeball gruesomeness there is a lot of red flowing on screen for the gorehounds to enjoy.

Who ordered the eyeballs?

The original 1974 film was a slow-moving thriller that laid the groundwork for future “slasher” films to come, predating films like Halloween and Prom Night by several years.  The remake is a simple, gory mess of a movie but that seems to be what the filmmakers were aiming for and not try to simply update an older film to modern times like many remakes these days.  Black X-Mas is not great by any means but I came away being much more entertained the second time around and it’s good enough to come off my naughty list.

Story: 5 – Lunatic escapes mental asylum on Christmas Eve and kills college students in what used to be his home years ago where he killed his family.

Blood: 8 – While some kills may be off screen, there’s more than enough red stuff and ugh, eyeball gags to make you squirm.

Overall: 6 – If you’re a fan of the original, you may appreciate the nods the remake shows throughout but it’s a much different film and definitely not for everyone.

-Actress Andrea Martin, who played the house mother in this film, played the role of Phyllis in the original film.

-If you look closely in the background, you will see the infamous “leg lamp” from A Christmas Story.  Bob Clark, an executive producer on this film, was the director/producer of both A Christmas Story and the original Black Christmas.

-Michelle Trachtenberg only agreed to appear in the film if her character could die.

-The film was marketed as a Final Destination film in Japan.