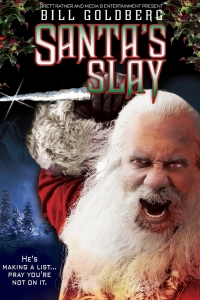 After being forced to deliver toys to boys and girls for a thousand years, Santa can finally go back to his wicked ways and does so in grand style by going on a murderous rampage across America.

He’s making a list, pray you’re not on it.

The film opens with Santa killing Rebecca Gayheart, Chris Kattan (thank you) Fran Drescher (again, thank you) and James Caan (!) who are a squabbling family for a few minutes before their untimely demise at the hands of St. Nick.  We learn not too later on that Santa was born of immaculate conception much like Jesus was, only he was evil.  In the year 1005, Santa made a bet with an angel and lost.  Per the terms of the contract, Santa had to be nice and deliver presents to children all over the world for a thousand years, the angel hoping that it would loosen him up a bit.  Now that the thousand years are up though, it’s time to rip the world a new one.

Five minutes into the movie and it delivers the best scene.

Santa arrives in Hell Township, USA to spread some Christmas fear and get some payback while he’s at it.  While Santa’s out murdering strippers, teenage Nicholas is being read a story from the family’s “Book of Klaus” by his grandfather (Robert Culp in another horror-themed Christmas movie) about the real Santa Claus being an evil jerk who lost a game of curling to an angel.  Grandfather knows the thousand years are up and is getting ready should Santa show up bearing gifts of a murderous nature.  Meanwhile, Nicholas and his girlfriend are quickly involved when Santa kills their boss and he’s initially taken in for the murder.  When he gets out, Santa follows them to Nick’s grandfather for reasons you can probably figure out.

The movie starts off pretty hot but cools off quickly and never reaches even the minimal heights it reached in that opening star-studded scene.  While some of the earlier scenes with Santa provide some ridiculous entertainment, the majority of the film is trying to be just as silly in trying to explain the story and move the “plot” along but aims so low in delivering it’s intended humour that it kills the comedy aspect of the film pretty quickly.  It tries too hard to be funny; every line, plot thread, every kill has to reek of being funny but it feels more like the filmmakers are throwing anything funny at a wall and seeing what sticks and unfortunately what sticks is too few and far between to really enjoy Santa’s Slay overall.

Santa has a real (kosher) beef with the jews.

Easily the best, and only, reason to recommend the film are the wacky ways that Santa likes to do in his victims.  Wrestler Bill Goldberg looks like he’s having fun as he stabs a Jewish delicatessen owner with his own menorah, drowns someone in eggnog, stabs someone with a Christmas tree star, runs over an old person with his flying red-nosed, uh, bison?  Pretty sure it’s not a reindeer.  You get the drift though, a lot of the kills riff off the holidays and that’s pretty much where the fun stops.

As with any comedy, your mileage may vary and you may enjoy this film more than I did.  The film starts with a decent enough premise but the main story is rubbish and just filler until the next Santa scene.  You could do worse for a holiday horror film but there is also so much better to waste your time on than this.

Story: 5 – Santa is Satan’s son and is tricked to deliver toys for a thousand years before he can do anything naughty.  Once the thousand years are up, he doesn’t waste any time.

Blood: 5 – There are some bloody kills but in the spirit of being funny, the kill scenes can be more over-the-top crazy than flat out gory.  The body count is very high though.

Overall: 4 – If you balance out the good with the bad, you get a movie that’s just barely average at best.

-Most of the lead actors in the film are Jewish.

-Wrestling fans who watch the movie should stick around for a post credit scene.