A family moves to Mexico so the father can start a doll factory but a nearby archaeological dig unearths an evil spirit that possesses one of the dolls in the factory and turns it into a murderous toy.

After an introduction involving an old archaeologist unearthing a tomb near a small city in Mexico, he’s hilariously crushed by the tomb door as an evil spirit escapes and winds up inside an old, abandoned doll factory where you are free to assume it will inhabit the body of a doll.  The very next day, Elliot Wade (Bottoms) and his family are flying into that city because he’s going to manufacture a new doll at the factory.  Upon inspection, the building is a dilapidated mess so it’s not exactly ready to go.  Elliot’s daughter, Jessica, looks around and finds a group of dolls the factory used to make and convinces her dad to take one.  He chose….poorly. 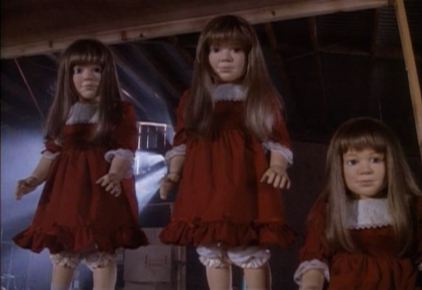 As Jessica plays with “Dolly,” she begins to turn from a sweet and innocent little girl to a child from Hell.  The mother is certain the doll has something to do with Jessica’s sudden change but whenever she tries to separate the two Jessica lashes out violently at her or anyone else around her.  But it’s when Jessica goes to sleep that it gets serious as Dolly comes to life and goes out of her way to kill people including the house maid and the night watchman.

Don’t you go killing me now.

Meanwhile, Jessica’s brother, Jimmy, has decided to follow around another archaeologist (Torn) who intends to find the tomb where his friend was killed and finish what was originally started.  He eventually discovers that the tomb belonged to an evil entity known by an ancient civilization as a “Devil Child” which explains why the spirit took the doll’s form?  Jimmy is quick to assume that this spirit is in Jessica’s doll and is off to save the day. 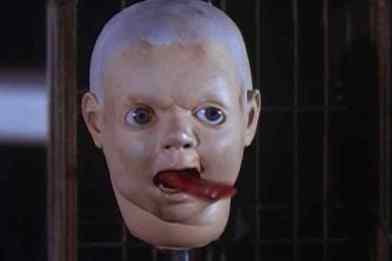 Oh take this seriously, will you?

I’m certain most anyone who looks at the box cover will ask if it’s as good as Child’s Play and the answer would be a decisive, “Hell no.”  In fact, it’s not as good as the worst Child’s Play film, which to me is Child’s Play 3 (which coincidentally came out the same year as Dolly Dearest.)  There are many parallels when you compare the two (ie: Voodoo or “Sanzian Devil Child” is all hocus pocus to get a killer doll to live) with maybe the main difference between the two is that the spirit inhabiting Dolly can jump from doll to doll or even control multiple dolls, which is a nice change of pace from the usual stabby killer doll but she does that too.  The effects for Dolly, other than putting a little person in a dress of course, aren’t too bad given the small budget but still pale when you make the comparison to Chucky.

The effects aren’t the issue though, it’s the predictability.  There are some good moments early on, where the doll is mostly heard and not seen, which made me think the film was going to do the less is more approach with the killer, but eventually Dolly is jumping out at everyone, usually with a blade in hand.  By the time this movie came out, there had been three Child’s Plays, a couple of Puppet Masters and even the film that preceded all of them, 1987’s Dolls. In comparison, Dolly isn’t very interesting as it doesn’t do enough to separate itself from its “inspiration” let alone compare to other films in the killer doll subgenre.

Blood: 3 – Some light stabbing, an electrocution and death by heart attack.

Nudity: 0 – Thanks for nothing!

-Had a small theatrical run before getting released on video in 1992.