A seemingly friendly farmer and his sister kidnap unsuspecting travellers and bury them alive, using them to create the “special ingredient” of their famous roadside fritters.

It takes all kinds of critters to make Farmer Vincent’s fritters.

Vincent, a local God-fearing farmer known for owning the nearby Motel Hello as well as making the best damn smoked meat for the past thirty years, witnesses a motorcycle accident near the farm.  The operator is dead but his passenger, a young woman named Terry (Axelrod) survives.  Vincent takes it upon himself to bring her back to the farm where his sister Ida (Parsons) nurses her back to health.  That Farmer Vincent is such a great guy and the only secret he keeps is the ingredient in his meat, which even his younger brother, Bruce, the town’s sheriff (Linke) doesn’t even know.

Vincent must keep the smoked meat market going so he goes out to hunting each night for new victims, er, ingredients to mix with his pork.  He develops a knack for creating elaborate traps to get the unsuspecting drivers of the nearby highway out of their vehicle so he can then knock them out.  He and Ida take the bodies to a secret garden where they are planted and looked after until they’re ready for “harvesting.”  He also cuts their vocal chords so they’re only able to make disgusting gurgling sounds as he contemplates doing the good lord’s work.  As Terry heals, she decides to stay on the farm and help out.  Bruce becomes smitten with her but Vincent is the one she has eyes for though this incurs the wrath of Ida who never fully trusts Terry, figuring Vincent is love blind.

The worst heads of lettuce they ever grew.

While the mere thought of someone serving human meat to people is of course disgusting, the movie carries a surprising amount of humour with it’s gruesome subject matter.  It helps that the movie isn’t overly graphic and wants to be weird whenever possible which helps the dark, satirical humour be a little more accessible and it was one of the aspects I liked most about the film.  While there are a few moments of levity that I thought were too cartoony compared to the rest of the movie, the comedic undertones provided more than a few laughs throughout.    Those looking for a gory treat may be disappointed to learn that the majority of the violence on screen is fairly dry until the big chainsaw duel towards the end of the film which kind of makes up for the lack of red stuff.  Toss in some gratuitous nudity from Axelrod and the movie covers all of its bases nicely.

It wasn’t sexy when you put on the pig head, it’s not sexy with the chainsaw either.

Motel Hell has developed a cult following over the decades and I can see why.  It’s rare for a horror film to aim to be funny and succeed and Motel Hell succeeds more often than not while delivering such an odd yet entertaining movie about a sweet old farmer who happens to be a cannibal who really likes homemade Slim Jims made out of hippies.  Is that so wrong?

Blood: 4 – There’s nothing really graphic until towards the end of the film.

Nudity: 8 – Ms. Axelrod shows off in many ways from a wet t-shirt to a bath scene.  Thank you!

Overall: 7 – While some may not appreciate the style of comedy shown in the film, others will appreciate and enjoy that same dark sense of humour all the way to the end of the film.

-Famous 70s disc jockey “Wolfman Jack” cameos as a televangelist and future Cheers alum John Ratzenberger is seen briefly as one of the many victims of Farmer Vincent.

-This film was the first lead film in some time for actor Rory Calhoun.

Judging a Book by it’s Cover 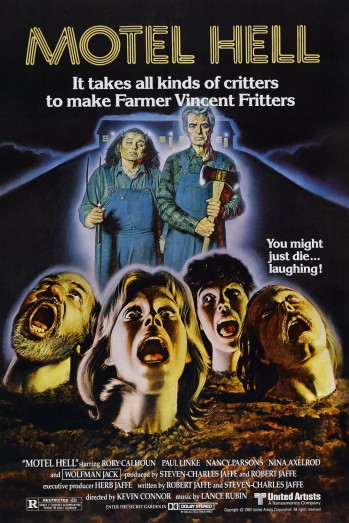 -First off, I like the rhyming of the title and the tagline.  The first one anyway, why does a film need two taglines?

-I also like the ‘American Gothic’ inspired background with the SCARY, SCREAMING HEADS in front of them.  Very nightmare-inducing imagery.  Not much focus on the actual hotel in the background though.  Oh well.  Screaming heads!