A wrongly imprisoned cop, murdered in the slammer, comes back from the grave killing his way through innocent civilians on his way towards revenge against the precinct he believes sent him to his death.

-How does that lamp blast enough light on the badge from back there?  I can see the stitches in his hand so well.  Amazing.

-Does he just brain people with his baton?  That’d be fun to watch actually.

You have the right to remain silent…forever!

Bruce Campbell is Jack Forrest, a young rookie police officer who is learning the hard way that the job takes it’s toll on your family.  His marriage is falling apart and counselling isn’t helping. In fact, there’s a psycho on the loose killing innocent people while wearing a uniform and his wife thinks it’s him!

Just like Where’s Waldo, you found Bruce Campbell in another movie!

She follows him to a motel and catches Jack in the act of doing his partner Theresa.  Hey, at least he’s not a killer, right?  That’s something!  She runs into the killer who is more than happy to shut her up permanently.  Jack is arrested for the killings though his superior (Atkins) believes someone else is to blame and his investigation leads to a dead cop named Matt Cordell. 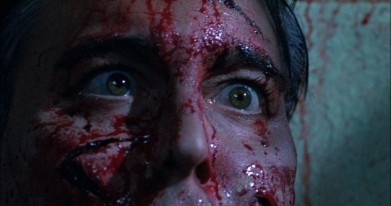 Killed in the shower, surrounded by nards.

Cordell (Z’Dar) was an officer investigating the corrupt city politicians but they wound up getting him sent to prison due to his predilection for police brutality.  Inside the clink, he’s ganged up on by several inmates in the showers, mutilated and stabbed repeatedly and left for dead.  Somehow he’s back though and he shows off how pissed off he is in the way he puts people out of his misery. 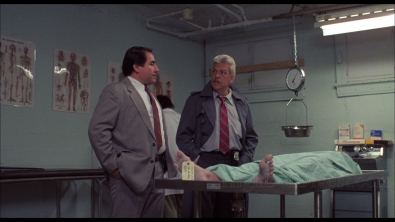 Cordell carries a blade sheathed inside his baton and uses it frequently so there’s plenty of bloodshed.  He’s also very hands on by snapping necks and getting dirty by shoving someone’s face in wet cement.  That’s an especially bad way to go.

Maniac Cop is an odd combination of police procedural and the 80s style slasher.  As much as you can joke about cops getting away with killing people these days, a killer dressed as a cop was certainly a legit scary idea back then, especially if he were disfigured and maybe undead…?  Larry Cohen’s script gets surprisingly deep compared to the average genre flick as it touches on themes like the public’s trust being shattered because a cop is killing people and how they defend themselves.

That’s a serious case of scabies.

As far as late 80s slashers go, Maniac Cop is easily one of the better and more recommended releases.  It doesn’t rewrite the genre but it puts more effort into making a good film than a lot of other films of that time plus we get genre vets Bruce Campbell and Tom Atkins in one of their better films.  Give it, and its superior first sequel, a shot!

Story: 6 – Dead cop comes back undead to kill anyone but especially those that got him killed in the first place.

Blood: 6 – Not every kill is a gorefest but there are some nice splashes of blood and a headshot you won’t see coming.

Overall: 7 – A fine slasher that squeezes a bit of life out of the dying genre at the time.

–Maniac Cop is set in New York City but the production only filmed there for three days.