Strange things are afoot at the Millennium Building where someone or something seems to have taken control of the buildings’ elevators and killing anyone it wants.  A sentient killer elevator movie?  Wow…

-Hey, it’s Naomi Watts before anyone knew who she was.

-I wonder if this movie is one bad mutha…

The film opens with a wraparound of New York City’s biggest tourist attraction, the fictional Millennium Building, with a couple of security guards using the coin-operated binoculars to spy on an adjacent building for some naked ladies.  They’re called away for duty on a stormy evening which brings plenty of lightning which may have struck the building.  The elevator starts messing around with one of the guards while the other is in the bathroom and if it weren’t for his flashlight getting in the way, he could have been smushed by the doors.  Dun dun dunnn!

Whoa, who cut the cheese in here?

The next day, the elevator pushes it’s shenanigans further when a group of pregnant women get in after a workout.  It traps them and cuts off the air which causes them to panic and even break their water and give birth.  This is fifteen minutes into the movie!  The elevator gives them up after a guard tries to break open the door with an axe.   A pair of technicians, Jeff and Mark (Marshal) who are familiar with the elevator system are called in to investigate though they can’t seem to find anything mechanically wrong.

Is that an elevator or a tanning booth?

Not too long after the investigation, however, the elevator turns into a huge douchebag when it messes with a blind man and his dog by taking him high up and luring him towards the open door though there’s no car and he falls to his doom.  With his dog.  Not impressed.  😦  One of the previous guards finds the dog but gets his head stuck in the door and loses his head when the elevator comes down sloooowly on him.  And to prove it has a strange sense of humour, it somehow sucks in a skater, takes him up eighty floors in seconds and literally spits him out through the windows and he splats to his doom. 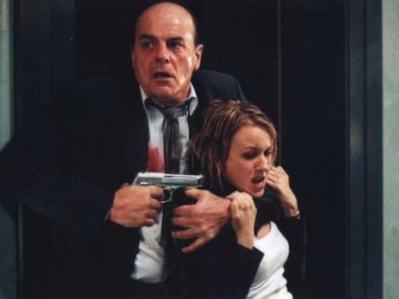 Michael Ironside IS the killer elevator!

After Jeff is found chewed up, Mark teams with a tabloid reporter (Watts) to find out the history behind the building’s elevators and stop the evil entity that is causing all of this paranormal wackiness once and for all although the President of the United States also gets involved, believing the acts to be considered terrorism.  He sends a team to the building to stop Mark who they think is responsible for the deaths.  Ohhh, that wasn’t a timely subplot in 2001.

The old “dead guy falling through the elevator ceiling” gag.

The “killer elevator” genre is admittedly pretty lean.  Aside from the more recent M. Night Shyamalan-produced Devil, the only other one I can recall is 1983’s The Lift…which The Shaft is a remake of with the same director!  I’ve never seen the original film so I can’t comment on the similarities or differences between the two.  The Shaft leans heavily towards being a serious horror film; even with the silly subplot that explains the elevator has a “heart,” the movie veers far away from that serious tone whenever the elevator goes after its victims.  With what’s shown on screen there’s just no way to keep a straight face.  Maybe that’s what the filmmakers intended but it makes the film very uneven although I will admit to being most entertained by those very scenes that break the tone.  The films’ credits have Aerosmith’s “Love in an Elevator” which made me think the entire movie must’ve been a comedy.  I guess I’m saying don’t plan on taking The Shaft seriously.

Story: 5 – A killer elevator with a mind of its own becomes a huge douchebag by killing visitors in some pretty hilarious ways you’d never think an elevator could do.

Blood: 6 – There are several unintentionally funny death scenes though one of the few serious ones involves a slow, grisly decapitation of a guard.

Nudity: 6 – Two nude hookers are briefly seen showing off the goods in the opening scenes of the film.

Overall: 5 – Far from great but surprisingly not bad.  The film entertains at the strangest times, usually in a comedic fashion more than anything scary.

-The movie was primarily filmed in the Netherlands with a brief shooting time in New York for exterior shots.