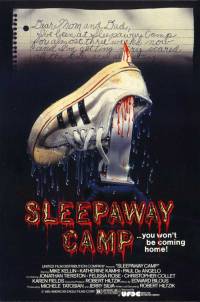 The mid-80’s were a tough time for a horror movie, it was a very crowded genre with a new release coming out almost every other week, or so it seemed.  It took a lot for a movie to look different from the others, which all look alike after a while.  One movie tried to be a little different and that was Sleepaway Camp.  Those that have seen it, will always remember it for its shocking ending. It was well received enough to warrant sequels so the series continued on in the even more crowded direct to video market, though without series creator Robert Hiltzik.  If you were the type of person looking for boobs and blood in your slasher, the new filmmakers were more than happy to help out with that.  After the third film, the series went on a long hiatus until 2008 when the original creator came back to film the last film in the series to date.  So click below to share in the strange glory that is the Sleepaway Camp series. END_OF_DOCUMENT_TOKEN_TO_BE_REPLACED