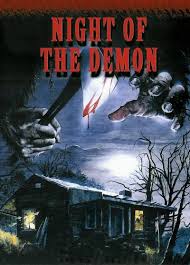 An anthropology professor brings a group of his students into a forest in search of the existence of Bigfoot.  They’ll wish they hadn’t bothered because not only do they find out that yes, there is a Bigfoot, he’s a bloody killer and a bit of a pervert to boot.

The film opens with a man in a hospital bed with bandages covering the bottom half of his face. He’s Dr. Nugent, an anthropology professor and he took his students on an expedition into the woods after seeing possible evidence of Bigfoot’s existence. The police ask him to recount what happened to him and his students out in the woods and what a story he weaves.

Based on a sketchy piece of film Nugent obtained, he and his students put together an expedition into the woods to find realistic evidence of the evil sasquatch beast we know as Bigfoot. This ain’t Harry and the Hendersons. The video shows a family out on a picnic who are subsequently attacked by a tall creature and haven’t been seen since. The university washes their hands of any liability if something should go wrong, but the group goes on anyway. 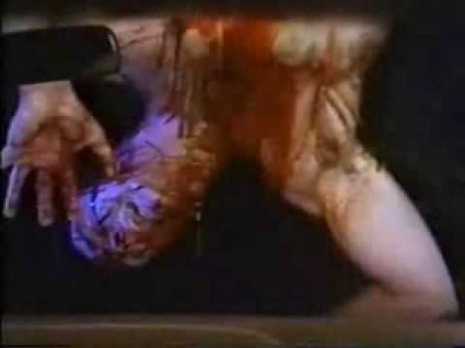 While the group is out interviewing people about the disappearances, Bigfoot is out murdering everybody else. Just straight up tearing them apart. The story veers off course when the group happens upon a cult who are performing some weird sex ritual with a woman and a big, wooden Bigfoot statue. They save the woman who runs off afterwards but they attract the creature who begins following them around.

After a Bigfoot attack injures one of the students, they try to escape and find a cabin which belongs to Wanda, the woman who was being sacrificed the night before. Nugent uses hypnosis to induce an incredibly long flashback which shows us Wanda’s past. She was constantly abused by her hyper-religious father who believed in whipping the evil out. She escapes into the night only to be attacked and raped by Bigfoot and becomes pregnant. Her father constantly prays for their deaths up until she conceives the half human/half creature baby and he immediately kills it. Wanda then sets him on fire and makes it look like a suicide.

Looking to get creeped out even more, the students dig up the remains to find bones resembling more creature than man. Bigfoot won’t stand for this and attacks the group again who have to hold up inside Wanda’s cabin. Bigfoot easily breaks into the cabin and dispatches everyone, except for Nugent who miraculously survives the slaughter. It doesn’t end there but I won’t go any further because, yes, there’s more!

Did you read all that? Bigfoot exists and he’s a violent, raping monster. Who wrote this script, the Weekly World News? I was initially surprised to learn this film was a Video Nasty (click here to learn more about those, click here to see which ones I’ve covered so far) because it was really silly to start off but by the end I guess I could see where someone would logically ask in 1980 if society needed a movie where Bigfoot has to force himself on a girl to preserve his species all the while painting the roses red with human blood and entrails? The answer was apparently, “Yes.” 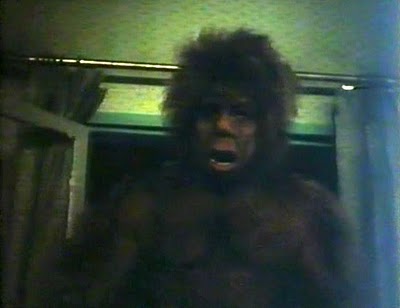 The big guy looks really silly, like some awful wookie costume someone pieced together. The creature is akin to an incredibly hairy Jason Voorhees; he never kills his victims the same way twice. From slit throats to tearing some intestines out to ripping a man’s dick off, Bigfoot gets the job done. Actually, Bigfoot does a more entertaining sleeping bag kill than Jason did! The film is hilariously bloody, usually overly so, but that’s fine, it fits with the rest of the production: it’s all bad!

The acting is awful with lots of wooden delivery, though I will say there’s never a scene with overacting involved (aside from the Bigfoot scenes, of course.) If anything they’re all “underacting,” if you catch my drift. The effects are simple at the best of times, sidesplittingly awful at the worst. The production treats the film very seriously although the final product says otherwise. This is a movie that tries so hard yet all the flaws stack up against it, the constant failings leading to plenty of unintended laughs.

So, make no mistake, the film is awful on all accounts, but amazingly I couldn’t help but be entertained by it. There’s a few mean moments I could do without, but the film is so absurd and abstract, I found it funny.

Story: 7 – Points for originality, I suppose, you sick bastards.

Blood: 7 – Bigfoot dispatches his victims in a multitude of sometimes awful looking, but very bloody, ways.

Nudity: 3 – There’s a quick nude scene which starts off nice but ends too quickly because of you know who.

Overall: 7 – It’s awful, it’s fun, it’s certainly not for everyone. Recommended only for those looking for that true gem of a bad movie.

-Listed as a Video Nasty in the UK, the film remained banned until 1994 when it was released with some scenes being deleted, most being trimmed for violence.

Tagged as: 1980, Bigfoot, Night of the Demon, sasquatch, so bad it's good, video nasty