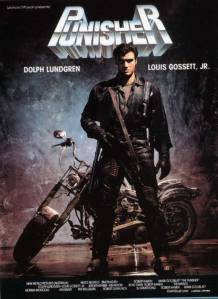 Frank Castle, aka the Punisher, continues his vigilante killing streak against a weakened mob who are in a war with an invading Yakuza who have kidnapped the children of the family heads likely for monetary reasons.

In this take on the ultimate comic vigilante, Frank Castle (Lundgren) was a police officer who was thought to have been killed alongside his family in a hit taken out by the mob.  Castle miraculously survives and becomes The Punisher, a vigilante who doles out vigilante justice with an extra side of bullets on all the mob families.  Even though he takes out the family members with extreme prejudice — he blows up one of their houses even after killing everyone inside — he’s still a ghost to most people; the police maintain that Frank Castle is dead.  His old partner, now part of the Punisher task force, believes he’s still alive as he investigates the mob killings.

Franco, one of the family heads, has an idea to merge all the families together to look after and distribute a large shipment of drugs coming in and then share in all the profits.  Fantastic idea but I’m not here to watch the mob carefully lay out plans — that’s what The Sopranos is for.  Enter the Yakuza!  Led by Lady Tanaka, the clan persuades all of the mob bosses to continue their operations like normal but just give them a huge slice of the pie.  Lady Tanaka has their children kidnapped to ensure they agree to her terms.

Oh, she’s got her kabuki make up on. She’s serious.

Where does the Punisher fit into this?  He’s just fine to see them kill each other but a poetic wino convinces him to save the children, because won’t SOMEBODY PLEASE THINK OF THE CHILDREN??  Hey, as long as he’s killing bad guys, he might as well do some real good, right?  Yeah, so let’s get into the Punisher. 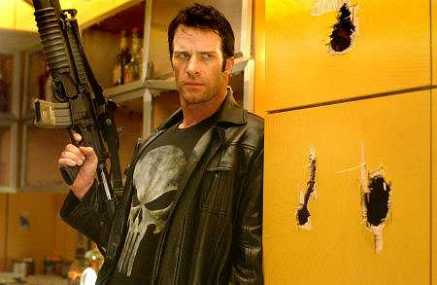 Hey, shoo! Get out of here!

Dolph Lundgren physically looks like he could be Frank Castle plus he can fight and shoot well enough for a movie.  But his dialogue — and worse, his delivery — is pretty bad.  He legitimately looks and sounds like he just woke up as he chews up his lines.  If that was the worst thing I could say, I’d be happy to leave it at that.  [inhale]

The first noticeable oddity you’ll be quick to point out is that the Punisher never wears his trademark skull shirt/flak jacket.  Without it, the Punisher might as well look like Snake Eater’s Lorenzo Lamas.  Sure, I guess I could think the filmmakers wanted it to be more “realistic” and why would a guy walk around with a giant skull, but c’mon, people are coming to see “The Punisher.”  Also, it’s a bit odd that Castle lives in the sewers.  And not the comfy sewers that a good 1/3 of the main Teenage Mutant Ninja Turtle cast live in, no, I’m talking about dingy, cramped sewer space.  But at least there’s enough space for him to drive his bike through…

“I hope that’s an espresso shot.”

The story initially sounds awesome with Castle getting in the middle of a huge war between the Italian mob and the Japanese Yakuza.  The Yakuza get the upper hand almost instantly with the child kidnapping plot so the mob resorts to asking Castle for help.  But that’s where things get hinky; the Punisher isn’t known for being your typical comic hero.  I’m not saying he wouldn’t try to save the children, but it just feels a little contrived to stick this anti-hero character in a story that’s more suited to good guy “heroes.”  It could’ve just been Punisher hunting down the bad guys while they play out Deadliest Warrior and even that’s better than the saving kids schtick.

You have horrible aim.

If there’s one aspect that the film gets right, it’s the level of violence you would expect from a Punisher film.  Just because Frank needs to save the kids doesn’t mean he’s not gonna toss a knife at a bad guy’s head in front of them.  He does that a few times actually.  There’s the usual gunshot wounds, some bloody sprays from gunshots and knife wounds.  Expect plenty of hand to hand combat as well, so there are several snapped necks to go around.  Not bad by late 80s standards.

If you’re a Punisher fan, you’ve come to know that the other two film adaptations that followed are at least better than this take on the comic.  I appreciate that the filmmakers decided not to go the “origin” route with the plot and delivered on their R rating with the violence but the film is a disappointment overall.

Story: 5 – Points for not being an origin story, but it’s far from being faithful to the source material.

Blood: 6 – There’s a fair amount of blood from gun and blade wounds, also a shocking amount of knives getting thrown at people’s faces.

Overall: 4 – I guess it’s the Punisher, but it’s a weak Punisher.

-The film’s distributor, New World Pictures, actually owned Marvel Comics at one point.  So it’s even stranger to think that they barely used the license they owned.  It’d be like if Marvel made an Iron Man movie and Howard Stark didn’t have the suit.

-A sequel was planned but New World Pictures filed for bankruptcy not long after the film’s release.