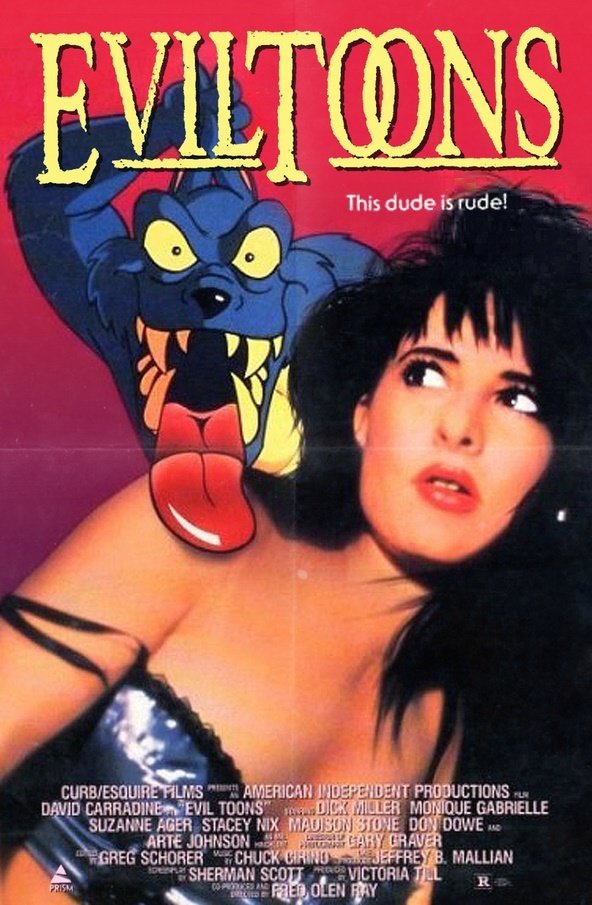 This dude is rude!

After the film opens — with a title card from the director promising that the following events we are about to watch are true —  David Carradine is carrying a wise-cracking knock-off Necronomicon from Evil Dead and approaches an abandoned stately manor to ultimately commit suicide by hanging.  Eeeee….

Sometime later, the house is put up for sale.  One morning, Burt (Dick Miller) drops off a quartet of college girls looking for some quick cash by cleaning up the house for the new owners.  Terry lays down some history on the house about how the previous owners vanished under mysterious circumstances before getting to work.  Megan meets one of the neighbors, Mr. Hinchlow (Johnson), who was sent to make sure the girls are okay and makes a point to make sure he’s seen their faces due to the recent murders happening.  I’m sure there are creepier ways to introduce yourself, but I can’t think of any. 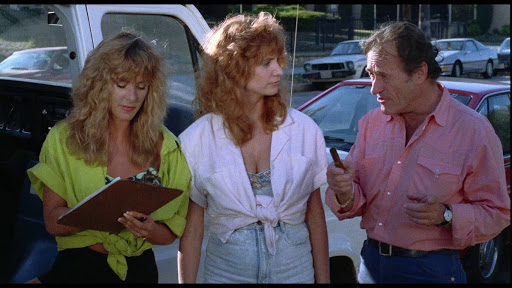 Let’s get this over with, I’m on loan from Gremlins 2.

The girls go down into the basement to start cleaning.  They come across a trunk in a corner and upon opening it the girls find a smelly dagger that Terry determines to be vitally important to keep for later.  They give up on cleaning for the rest of the night and get ready to hunker down as a thunderstorm looms over the house.  Roxanne surprises the girls with a spontaneous striptease and shows the nerdy and modest Megan how to dance like a carefree young woman should.  This is definitely the part of the movie I won’t complain about. 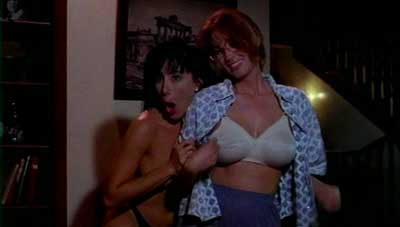 If you need a few reasons to watch the movie…

The ghost of David Carradine shows up to poop on the party o deliver the evil book to the girls who are hesitant to open it at first but hey, it won’t be a movie if they don’t!  The girls get Megan to decipher the language written in the book while simulaneously being disgusted at the imagery inside.  Megan speaks aloud some of the passages from the book which, if you’ve seen Evil Dead, you obviously know is a terrible thing to do.  As the girls split for the evening, the incantation brings to life one of the images in the book — in animated form.  The killer cartoon stalks and kills Roxanne then assumes her identity to fool everyone, including her boyfriend and Burt who are killed by her when they show up at the house.  Can the rest of the girls survive?

Carradine lives on as a frozen corpse for years to come.

Much like the animated terror, the film itself is not meant to be serious, coming off like a meta Scooby Doo episode for adults.  Characters will spit out obvious lines and situations such as, “Beautiful coeds going into the scary basement” and “Are we going to find a ouija board and be possessed by demons?”  Wink, wink, nudge, nudge, we’re in a bad horror movie, fellas!  The film can have entertaining, tongue-in-cheek moments but for the most part the comedy doesn’t pan out as it should.

Arguably the biggest draw for Evil Toons is well, the titular evil toons and as such the film is ultimately a disappointment.  First off, there’s only one cartoon character, not the plural that the title implies.  There’s very little in the way of animation as the demonic creature starts out as such but then conveniently takes over a human body so the budget doesn’t balloon because of the need for more animation.  Because of this, the excellent promise of a Roger Rabbit-style horror film doesn’t even come close to realization.

Story: 4 –  Beautiful girls spending the night in a haunted house have their lives put in danger thanks to summoning an animated demon from a book some creepy old man gave to them in the middle of the night.

Blood: 3 –  There is a little bit of blood-letting here and there but it’s quite tame.

Boobs: 8 –  Lots of exposed topless scenes from the girls, probably the only highlight to point out from the film.

Writer/director Fred Olen Ray initially pitched the idea for this picture to legendary exploitation movie producer Roger Corman. Ray told Corman he could make the film for only $250,000 dollars. Corman turned Ray down on the grounds that said budget was too low. So Ray made the picture on his own for only $140,000 dollars.

Shot in eight days using the equipment and crew from another production.