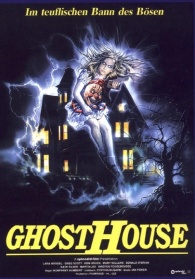 Visions of a deceased girl and her doll bring doom to the visitors of a deserted house where a mysterious yet gruesome double murder had taken place.

Death holds the mortgage and if you move in there’ll be hell to pay!

The film starts with a couple who punish their daughter on her birthday.  For killing the family’s cat, she’s locked in the dark basement alone with only her scary clown doll.  The punishment doesn’t go on for very long when supernatural happenings grab the parents’ attention so a creature can creep up on them and violently murder them.  As if that wasn’t bad enough, the little girl is left locked in the basement until she eventually passed away. 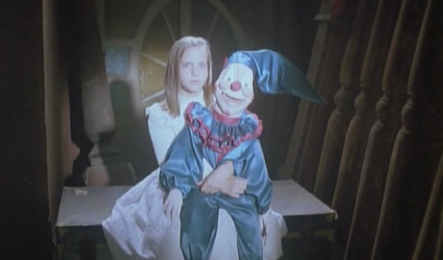 Why didn’t anyone warn me of a cursed clown doll?

Skip ahead twenty years, where a Ham radio enthusiast named Paul records a strange message over the radio waves and at the urging of his girlfriend, Martha, he tracks it down to an old house — guess which one?  When they arrive at the spooky manor, they meet a group of happy campers who are conveniently parked nearby and discovers that one of them is the voice they heard in the message.  The problem is the guy doesn’t remember saying it but wouldn’t you know that he eventually says the exact words when he’s visited by the ghost of a little girl with her doll — and her fucking annoying theme music that plays fifty times in the movie — who uses her supernatural powers to kill him. 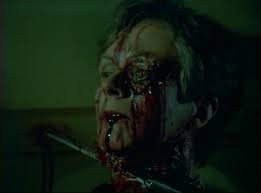 Paul looks deeper into the house’s history and discovers the gruesome past of the family that previously lived there while everyone sticks around the house even though their friend just died in a bad way.  As if the killer ghost in the house wasn’t bad enough, there’s a bizarre red herring that is introduced with the crazy, old caretaker of the house who also decides to go on a killing spree.  I mean, the police rightfully go after the nut bar because he’s a vicious killer, but these kids know the house is bad, yet keep going inside.  They kind of deserve it if they’re that stupid.

Hello I’ll be your death bringer for this evening.

With an angry ghost and a serial killer on the loose, the film offers up quite a bit of the red stuff and a few shocking kills though for the most part Ghosthouse is not as extreme as some Italian productions can be.  Stabbings, bludgeonings, a head split open with an axe…not exactly what you’d expect from a supernaturally-charged film but it’s an added bonus for those who like their blood since it’s like The Poltergeist got mixed with an Italian slasher flick. 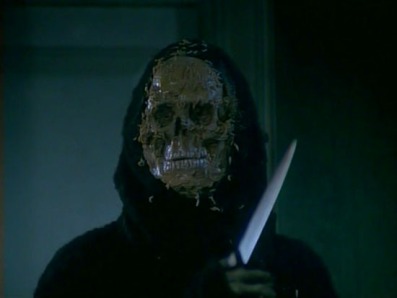 The film is far from perfect, with the paper thin story, the bad dialogue, dubbing and subsequent acting and that fucking annoying clown music…  Okay, it’s bad but it still offers up some decent scares, crazy kills and quite a few moments of unintentional hilarity.  Who cares if it doesn’t make sense?  (Unless you want a movie to make sense, then don’t watch this.)

Story: 3 – The ghost of the girl and her devil clown doll kill anyone who enters their house.  And people are stupid enough to keep doing it.

Blood: 7 – Vicious at times, if there isn’t a lot of blood shown then it’s certainly implied.

Overall: 5 – Honestly, I was going to score a bit lower but it entertained me enough to get through to the end.

-Filmed at the same house that was featured in Lucio Fulci’s The House by the Cemetery.

-The film has a tenuous connection to the Evil Dead series.  When the original Evil Dead was brought over to Italy, it was renamed ‘La Casa’ (The House.)  So it stood to reason that when Evil Dead II came out, it would be renamed ‘La Casa 2.’  Famed Italian filmmaker Joe D’Amato (see my review of D’Amato’s Anthropophagus) saw more dollar signs in the La Casa series so he produced several unofficial sequels, of which Ghosthouse is one of them.  It was originally known as La Casa 3 in its native Italy, it was changed to Ghosthouse for international release. 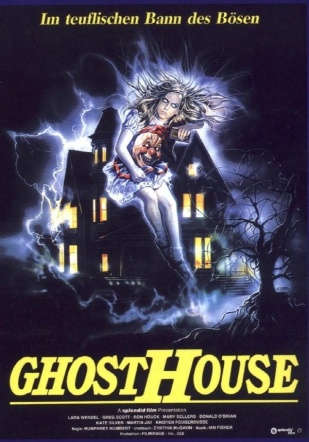 -Big scary house, covered in lightning and being sat on by a giant girl with the disembodied head of a clown?  I don’t know how the movie will tie all that together but I can’t wait to be disappointed!

-If the ghost is really the house I’ll be very upset.