Tired of seeing Earth children get all the Christmas fun, some Martians decide to kidnap Santa so that he can bring yuletide glee to Mars though one Martian in particular wants to do away with the jolly elf altogether. 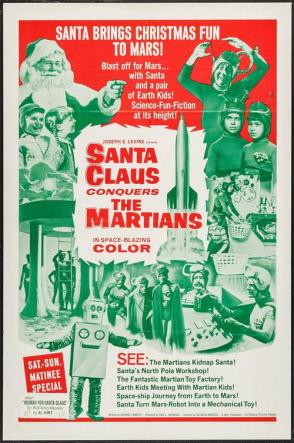 -“Space Blazing Color” as long as it’s in red or green?

-So Martians are just people with funny hats.

-There’s even a robot!  How can this movie possibly suck?

The film opens with the children of Mars watching Earth television and wondering what Christmas is all about.  Their parents, Kimar and Momar, are worried about them as they seem lifeless and lacking energy to do much of anything; this is a concern among many parents as their children are exhibiting the same behaviour after watching an interview with the real Santa Claus.

Thanks for letting us kidnap you!

Kimar gathers a party of concerned Martians and visits a local elder who, after realizing it’s December on Earth, apparently saw the children behaving this way centuries ago.  Forced into adulthood at an early age, the children never got to be “children” and have fun and play, etc.  The elder says Christmas must come to Mars and Santa along with it.  Kimar takes his ship to Earth to basically kidnap Santa — for the children!

Whoever asked for a giant robot must’ve been really good this year.

Among the crew are stowaway Dropo, the loveable planet idiot, and Voldar, the Grinch who hates Christmas.  Voldar hates the entire mission, hates anything fun and would rather kill Santa and be done with it.  If it weren’t for this guy, the movie would be over in half an hour max.  Kimar and crew arrive on Earth and run into a couple of children to get valuable intel before kidnapping them as well.  Once at Santa’s Workship, the Martians freeze a couple of elves and Mrs. Claus in order to make Santa come along with them to bring joy and cheer to another planet.  He reluctantly agrees.

I’ll avenge you all!

After a few rounds of attempted murder by Voldar on either Santa or the children, either is fine with him, the ship arrives home and Kimar gets a toy factory built instantaneously.  To accommodate Santa, all he has to do is push a button to manufacture a toy, which initially goes against his work ethic but at this point he’s just rolling with the punches.  Voldar, still on the loose, gathers a pair of minions who hate this new change being brought to Mars and go to the workshop to kidnap Santa but wind up with Dropo in Santa’s robes instead.  Martians must have bad eyesight.  They try to con Kimar into rescinding the entire notion of Christmas and sending the Earthlings back to Earth but when Voldar tries to kill Santa, he’s foiled by the children using their toys against him (while Santa gleefully laughs his ass off in the background which comes off like someone’s bad acid trip.)  Dropo is named the Martian Santa — because why not? — and everyone lives happily ever after. 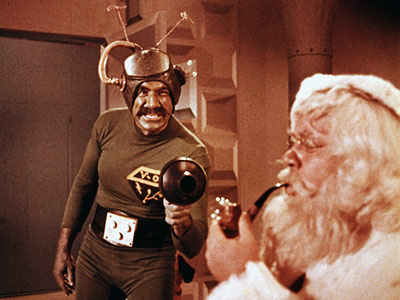 I can’t even begin to list the everything that made me laugh but the Martians dressing up like the Great Gazoo with ridiculously gigantic helmets used to communicate with each other is real funny.  The special effects are basically reduced to someone dressed up in a really bad polar bear outfit for a scene and the robot on the poster that looked so bad it was only in two scenes.  Low-budget, ultra-campy, G-rated 60s sci-fi awfulness at it’s best, Santa Claus Conquers the Martians is practically the worst in every regard –from story to dialogue to effects — yet it’s the right kind of bad to be enjoyed for some good laughs.

Story: 5 – Martian children are sad bastards so their parents kidnap Santa to bring Christmas to them.  I like the framework of the story but the execution is bad.  Real bad.

Blood: 0 – While I wish there was a scene with Santa going Rambo, alas there is nothing to see here.

Nudity: 0 – We don’t even get one Martian butt, what a crock.

Overall: 7 – Awful in every respect, the film was entertaining in so many ways that this may become a holiday staple of my future Christmas watching.

-The first film to feature a Mrs. Claus.

-The film shows up consistently on bad film lists.  Shocker.

-This was the first film for actress Pia Zadora, who played Gimar, and character actor Bill McCutcheon, who played Dropo.  McCutcheon went on to win an Emmy for his role as Uncle Wally on Sesame Street.

Categories: Review, So Bad it's Good!