Honestly, this is probably the best poster out of the three so far.  It’s not much better but the first two were very simplistic.

BEYOND the gates of Hell?  Ho-lee shit, I can’t wait to see that!

The third wish is the worst one of them all!

After receiving a package in the mail, a horny college professor (Connery) invites his prize pupil, Diana, for a night of research and maybe something more. Wink wink, nudge nudge.  She shows up early and finds a box inside the package and manages to open it rather easily.  Inside is a gem eerily reminiscent of a certain gem we’ve seen before. She gives it a rub to clean it off.  The professor eventually shows up and after a flirt gone wrong, she leaves him behind.  A new Djinn shows up looking for the one who woke him and instead gives a wish to the professor who apparently wished to be savagely slashed by two naked women pretending to be Arabian.  There are worse ways to go, I suppose.

This will be…my Goldeneye!

What follows is a long, boring movie about Diana’s inner demons over the death of her parents and fighting an outer demon in the evil djinn. A lot of the movie is Diana finding books about information we’ve already learned in the previous movies while the Djinn takes over Connery’s identity as the history professor and humorously teaches the students about how the Djinn (plural) were involved in major points in history.

Life just got a lot better.

The movie then takes a weird turn as Diana’s boyfriend is possessed by an angel sent to Earth with a magical sword in order to kill the Djinn. Where were you in the last movie, dude? Skip ahead to the end where the Djinn is eventually killed with the sword but Diana is mortally wounded until the angel makes it all better. There now you don’t have to watch this. 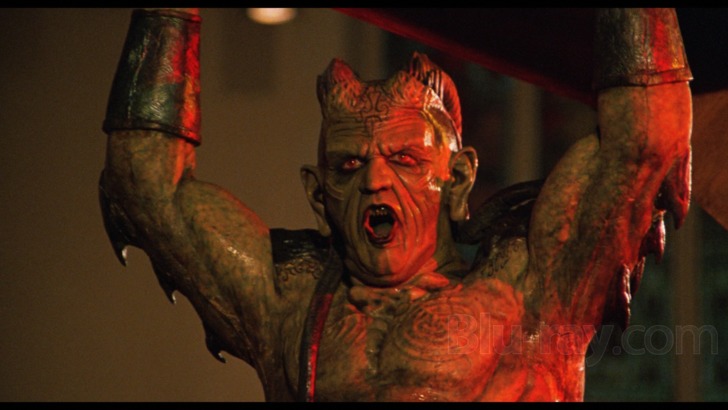 Can you recommend a deodorant for 10,000-year-old stank?

I’ve written a lot about the first two movies — more than I should’ve — so I’ll balance that out by keeping this short. This movie eats balls. Shot on a looow budget as a made-for-cable movie, anything you might have enjoyed from the previous movies are lost.  The movie breaks rules set forth by the preceding films, the wish kills are pretty stupid, and the movie is just plain boring.  There are huge stretches with nothing happening, the Djinn is barely seen in his real form (played by John Novak under heavy makeup) and even then it’s not very interesting.  This Djinn is basically a third rate Freddy Krueger and I thought we’ve gotten away from the cackling villains of old.  If there’s one positive thing I can say, is that this is the movie that finally introduces some nudity but it certainly can’t save this thing.

Story: 2 – Very much the same story as the previous movies which makes the third go around very stale.

Blood: 3 – Someone literally puking their guts out was kind of gross, everything else however is not worth mentioning.

Rating: 2 – I wish this was a better movie but it’s a turkey.

– Wishmaster 3 and 4 were filmed back-to-back on a 16-day shooting schedule in Winnipeg, Manitoba.